GROWING UP IN LOUISA: Splish, Splash!!!

That old song of Bobby Darin’s somehow came to my mind the other day and has stuck around in my brain. This hit song came out in 1958 and has been part of our language ever since. Who could beat the idea of a Saturday night bath that turned into a wild, if soggy mess? Of course this wasn’t a real memory because I can assure you such a thing only went on in the minds of us silly teenagers. We were far too modest for that to ever happen, but it sure sounded funny and made good dancing music.

People today don’t know it, but Saturday night baths that were a real thing in those days. We now take frequent showers without even thinking about it. This happened because of the invention of good hot water 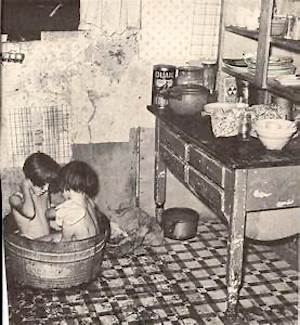 heaters, new plumbing, and new social norms. Today, some of us may have two or three showers every day. I’m sure the world has benefited, at least in my case.

In quiet moments I have thought back to watery times and scenes from some fun times. Our grandchildren would have a hard time dealing with sharing a family wash tub and having mom or dad pouring heated water over our shivering bodies. When the pioneers moved into the mountains those weekly scrubs with the bristle brushes were the way of life. Also, living in a one-room cabin didn’t lend itself to modesty, but some care was taken to allow as much privacy as possible.

I remember a day when a classmate’s grandmother who owned a tourist home on Franklin Street had a shower installed for her guests. The whole neighborhood gathered on the sidewalk to watch the plumber uncrate the shower and have his assistant help carry it inside to install on the second floor. The idea of heated water spraying over us was new and so exciting. While I had seen showers at the high school gym, they didn’t have hot water that I ever knew about. On a summer’s day it wouldn’t be but so bad, but in the fall and winter I couldn’t see getting clean was worth the cold wash one would have to endure.

One day several of us boys found ourselves on that same block on Franklin at Lady Washington, Creep Chandler’s house. I think that Creep, Johnny Bill Boggs, Harry Richard Cyrus and me, were tossing around a football. One thing led to another and we found ourselves tackling each other on the grassy berm. As fate would have it a rain storm came along that threatened to end our fun. The other boys left to go home but Harry Richard and I kept playing. We would tackle each other and slide in what had become pure mud. We laughed and played all the harder until we looked like two muddy mummies. Finally, the two of us walked down Franklin to my Clay Street home. Mom or Aunt Shirley took a water hose and washed us down one muddy layer at a time before we were allowed in the house. We took the caked clothing off and ran upstairs to the claw footed tub and a hot bath that was already drawn for us. We both got in and played with toys for some time until mom came in and washed our hair. It wasn’t even Saturday!

Our clothes were placed into the new washing machine on the back porch. This one had replaced the old wringer washer. The new one had a feature that could spin the water out of the finished wash. The clothing still had to be hung out to dry, so we were given some fresh clothing to put on. I’m sure the stuff they gave Harry was too big, but it covered him enough he could head for his home. I think he stayed down in the ‘Tin can Ally’ part of town behind the general hospital. That was a fairly long walk, so I loaned him my bike. 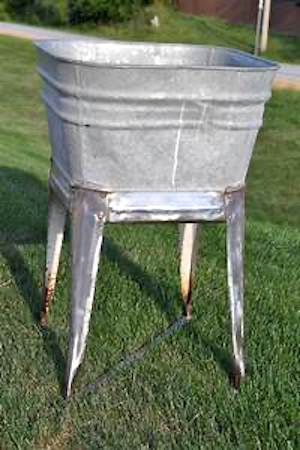 I remember the galvanized wash tub my family used to do the laundry before this muddy event. Back then the grownups had to fill the tub with heated water and use a scrub board with lye soap to work the dirt out of the stacks of dirty clothes. My wife still makes homemade lye soap out of beef fat and lye. While it seems harsh to some I never found it so. I have used it to wash for years. Many of our friends beg for a bar or two and Suzie is usually glad to share.

My thoughts turned to a scene from the movie, “Oh Brother, Where Art Thou?” If you have seen the movie you will recall that some ladies were out cleaning clothes in the creek by beating the wet garments against the rocks. I remember that the wash tub and scrub board method was something I saw when I was growing up, but only during those very early years. When I was still a youngster we got us an electric winger washer that had an agitator that forced the dirt right out of the fabric. It had a wringer that could swing over the tub to squeeze the water out in preparation to hanging the laundry out to dry. That was my part! In the earliest years it was all I could do to reach the clothesline, but I was soon enough able to reach the whole line and take them down when they were dry.

The whole process took several tubs of water, including fresh rinse water for the final process. It would be a couple of years before we had a direct connection from a water pipe and the washer. I remember once when Aunt Shirley wasn’t paying attention she got her hand caught up in the wringer. The safety latch finally released her but not before it had gotten from her fingers to her wrist. The doctor said she’d be okay but sore for a few days. 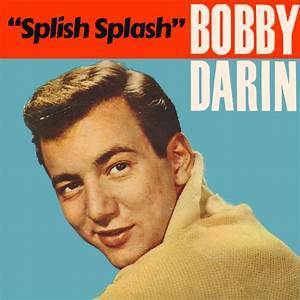 Over the years we would obtain a better washer, but not before our town got our first laundromat. The day it opened there was a big crowd with ladies from all around town carrying heavy baskets of laundry to do. Rather than hanging things out to dry, the laundromat had big electric driers. Once the final cycle of the day’s wash was done, the cleaned garments could be folded and put back in the basket to carry home. This first laundromat was on Jefferson Street in a white cinder-block building between Powhatan and South Streets. Later, when I was away in the Air Force, the town got a second one. I heard in a letter from home that Any York had closed his grocery store on the corner of Sycamore and Lock Avenue and installed a laundromat in the building.

Who would have thought back then that today we’d have matching washers and dryers in our homes? For that matter, how many would have tiled showers with multiple showerheads that wash our front and back at the same time? Why, many folks now have fancy jetted tubs and showers in multiple bath rooms throughout the house. Wow! Now that would get Bobby Darin singing again! “How was I to know there was a party going on?” mcoburncppo@aol.com