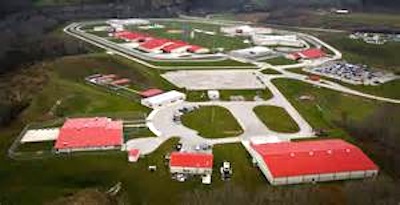 THE LITTLE SANDY CORRECTIONAL COMPLEX, A STATE PRISON NEAR SANDY HOOK, IN ELLIOTT COUNTY KENTUCKY; WHICH IS IN THE MIDST OF A MAJOR COVID OUTBREAK.

INFECTION COUNT AT CORRECTIONAL COMPLEX IN ELLIOTT COUNTY, WHICH HAS LESS THAN HALF THE POPULATION OF LAWRENCE COUNTY, CURRENTLY HAS WELL OVER TWICE THE NUMBER OF POSITIVE COVID-19 CASES

A major outbreak of the COVID-19 virus at a state prison in Elliott County has left around a quarter of the inmate population tested positive.

Currently, there are over 260 active coronavirus cases at the Little Sandy Correctional Complex, on Kentucky Route 7, about five miles from Sandy Hook, in Elliott County.

A member of Kentucky Governor Andy Beshear’s Executive Cabinet said Tuesday that prisoners are being separated into four groups based on their test results and whether they’ve had exposure to the coronavirus or are at risk.

The Little Sandy Correctional Complex is the fourth state prison to have over 200 inmates tested positive for coronavirus since the outbreak began in March 2020.

The large number of positive infection cases at the state prison had caused the total number of COVID-19 cases in Elliott County to be larger than the COVID 19 count in neighboring counties that have at least double to more than triple the citizen population of Elliott County.

The Little Sandy Correctional Complex is a minimum and medium/maximum security prison located near Sandy Hook, in Elliott County Kentucky. The facility is operated by the Kentucky Department of Corrections. The prison is the most recently constructed state prison in Kentucky, having opened in 2005.

Funding for a new state prison that would eventually lead to the Little Sandy Correctional Complex being constructed was allocated in 1998 under Kentucky Governor Paul E. Patton, which was meant to expand jobs and relieve the overcrowding of Kentucky’s prisons. On December 2, 2001 Governor Paul Patton, and other public officials broke ground for the medium security prison in Elliott County, Kentucky, on Kentucky 7 about five miles from Sandy Hook.

The Little Sandy state prison was originally designed and built as 895 bed medium security facility, but has routinely had a prison population of more than a 1000 inmates at any given time in past several years, along with the additional changing of the original medium security designation of the prison, with some of the inmates being housed and label as ‘maximum security’, while some of the other inmates are housed and labeled as ‘minimum security’ prisoners.

Dawgs and Rams this Friday night is Cancelled due to virus