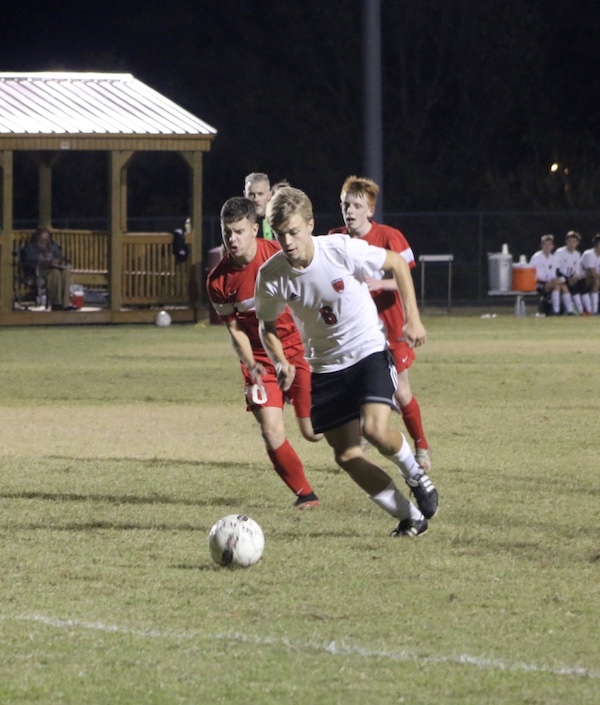 Luke Johnson knocked in three goals and Joseph Moore added one as Lawrence County improved to 9-4.
Blake Maynard had two assists and Will Dillow added one.
Goalkeeper Trenton Adkins had 13 saves.

Isaiah Zuidema scored the lone goal for the Cardinals, whose season ended at 4-6-1, off an assist from Jestin Barker.

The Bulldogs will play Prestonsburg ( 14-1 ) tonight at Belfry High School at 6:30 for the 15th Region Boys Championship.

“… We are looking forward to it. We will need some players to step up big time to beat Prestonsburg. We have a solid game plan and can’t wait to see how it plays out tonight.”

Paintsville, Ky. — Senior Ellie Webb has one goal and contributed two assists as the SoccerDawgs pulled out a 3-2 victory over Host Johnson Central Tuesday night in the semifinals of the 15th Region Tournament.

Senior Ellie Webb was tight in the middle of the action in the SoccerDawgs Region victory over Johnson Central. 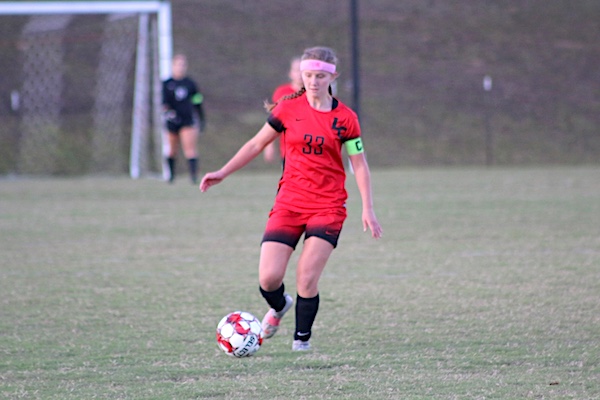 Lawrence County improved to 11-2-1 on the year.

Camran Diamond and Emersyn Elliott each scored a goal.

Johnson Central’s season comes to an end at 9-2-1.

Lawrence Co. will play for the 15th Region Championship against Prestonsburg ( 12-3 ) Thursday at 6:30 at Johnson Central High School.

“… What a game! Anytime we meet up with JC it always seems to be a tight match and last night wasn’t any different. We came out and moved the ball well and had chances but couldn’t get anything in the net early on. I’ll give them credit they are very athletic and fast all across the field. We were able to finish 3 set plays for goals and hold them late in the game to give us a 3-2 win. Emersyn Elliott, Ellie Webb and Camran Diamond all found the net.

“…I can’t say enough about the entire team for how hard they fought the entire game. We fell behind early and like we have done in several games this year we held our heads high and fought back to even the score. All out team effort from top to bottom is what gave us this win. This team plays for each other and it shows every time we take the field. When our starting goalkeeper Kaison Ward went down a few weeks ago some would’ve thought we were done but Alyssa Moore, Saibra Moore, Camran Diamond and Citori Branham all stepped out of their comfort zone and has delivered game after game to keep our dream alive of winning the Region. I can’t say enough about those 4 players especially Alyssa for giving our team the chance to advance to the Region final on Thursday. We are looking forward to the region final on Thursday against Prestonsburg at 6:30pm hosted at JC.