#13 Tanner Copley and #1 Zack Ball embrace after Ball’s 23 yard touchdown catch to open up the scoring in the Rebels victory. 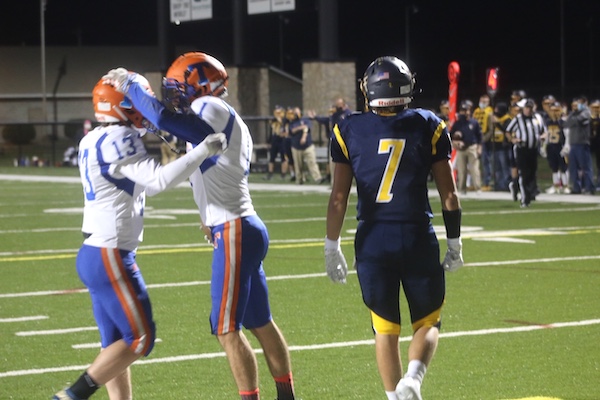 Tolsia took the opening drive and on 4th and 8 Muncy scrambled and found Ball wide open in the end zone for a 23 yard touchdown, Muncy hit Tanner Copley for the 2 point conversion and the Rebels led 8-0 with 7:21 left in the opening period.

The Bees marched right back down the field to make it 8-7 on a Ian Crookshanks 5 yard touchdown pass to Seth Watkins and Justin Stinespring tacked on the PAT with 2:53 left in the first quarter.

After a Tolsia punt East Fairmont was on the move to take the lead before TJ Jackson stripped the ball carrier of the ball and the Rebels took over.

Late in the first half on 4th and 3 Muncy lofted a beautiful touchdown strike to Ball from 32 yards out and John Wilson tacked on the 2 point conversion to make it 16-7 which would also be the halftime score.

On the opening drive of the second half the Bees pulled within 16-14 as Crookshanks scored on a one yard touchdown and Stinespring added his second PAT with 7:25 left in the third.

Both teams would trade punts before East Fairmont took possession and went to the air but Gavin Meadows made a leaping interception right at midfield and picked up a couple blocks and weaved his wave in for the pick six and the Rebels led 22-14 with 3:32 left in the third.

Gavin Meadows coast into the end zone after his 50 yard interception to seal the game for the Rebels. 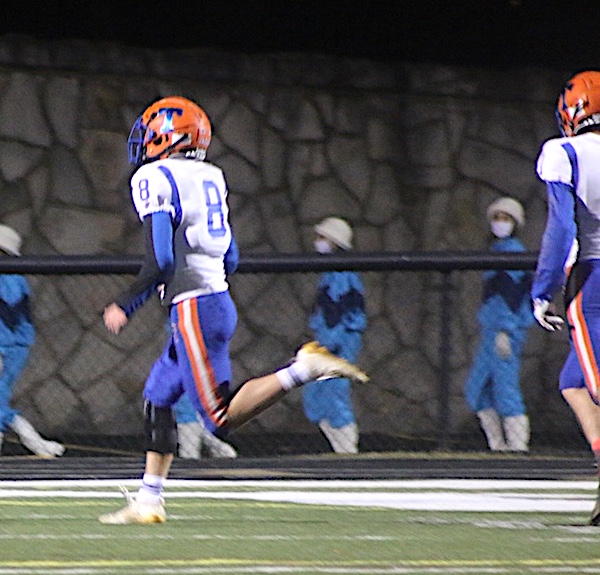 In the fourth Tolsia drove a couple times into Bee territory but coughed up the football and gave East Fairmont a couple opportunities but Devin Stull, Josh Wilson and the rest of the defense bent but didn’t break and the Rebels picked up a much needed victory over a Class 2A foe. 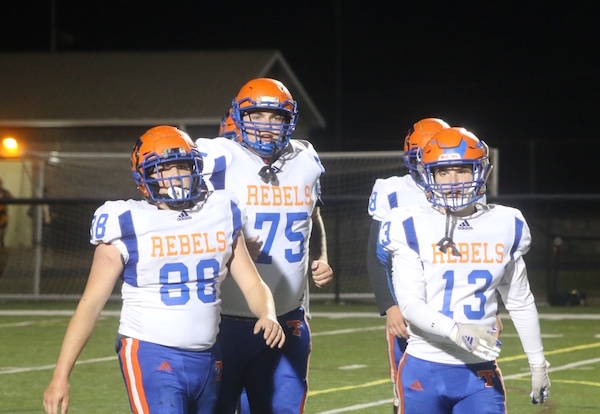 Muncy went 6-of-12 for 132 yards and 2 touchdowns and also picked off a pass on defense, His favorite target was Ball who had 5 receptions for 128 yards and both receiving touchdowns.

John Wilson was the leading rusher for Tolsia with 19 carries for 76 yards and a 2 point conversion run.

For East Fairmont Freshman Ian Crookshanks led the ground game for the Bees with 10 carries for 35 yards. He also went 10-of-18 for 81 yards and a touchdown, but also threw 2 interceptions.

Tolsia will make another long road trip when the travel to Mount View this Friday night for a key Class A matchup.

“… Every Saturday it is a chore to find a football game. I’ll start tonight and by 5 o ‘clock tomorrow they are gone. We are just happy to almost get everyone back healthy and get a win. Should be a happy bus ride home tonight.”

“… Our defense was outstanding tonight. We moved a few people around before the game and it paid off, The Meadows interception was unreal. He has been playing outside linebacker and we moved him to corner tonight. To shut them out in the fourth quarter is outstanding.”