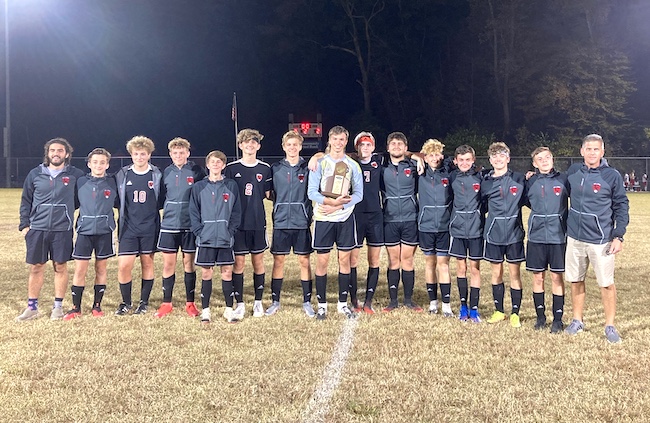 Junior Luke Johnson scored two goals and had one assist, Freshman Blake Maynard knocked a free kick home to give the Dawgs some cushion and a 3-1 lead.

Junior Goal Keeper Trenton Adkins and the defense did just enough the rest of the to preserve the victory.

The SoccerDawgs improved to 8-4 on the year and will advance to the 15th Region Tournament and play Martin Co. ( 4-5 ) at Belfry Monday night at 8:30.

The Championship game is slated for 6:30 on Wednesday at Belfry.

“… It was a close one. We started slow and got down a goal early in the first half off of missed coverage and a misjudged ball. It gave Belfry some momentum early. Blake Maynard made a huge hustle play down the middle of the field and was able to take a nice shot that rebounded off the keeper and Luke was able to finish to tie it up. Luke was able to fire a shot from outside the box late in the half to put us up 2-1. Blake had a nice feed to him for the assist. We held on in the second half with help by a beautiful free kick by Blake in the 13th minute to go 3-1.”

“…Belfry made it interesting after we allowed a goal midway though the half after an unlucky bounce. The boys held on and brought home a third straight district championship.”