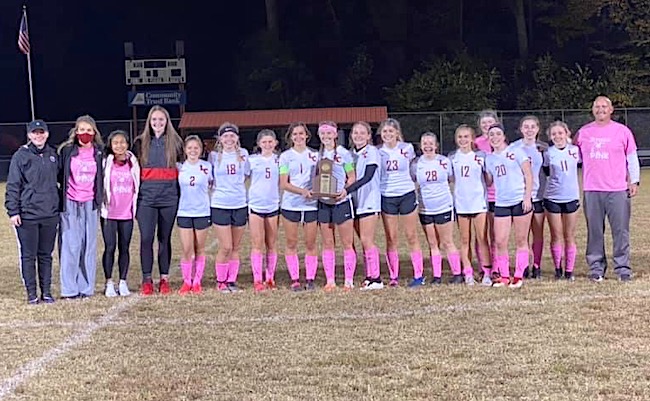 The SoccerDawgs improved to 10-2-1 on the season and will play host Johnson Central ( 9-1 ) on Tuesday night at 8:30 in the semifinals of the 15th Region Tournament.

The Championship game is slated for 6:30 on Thursday at Johnson Central.

“…Winning the District Championship for the 10th straight year is an achievement a lot of teams never achieve. From the start of the LC girls soccer program until now this team has always had a team mentality and that’s what it takes to be successful for so many years.”

“… Thursday night was not an easy win for us. We had to work the entire game. My hat goes off to Pikeville. They came out to play and played us as tough as they could. When we got everyone involved we were able to possess and keep the ball on their end of the field and come away with a 6-0 win.

“… Coming into the 2020 season we didn’t know what to expect as far as games and getting to play. As a coaching staff we knew we had the players to put together another championship contender team. We have battled in every game and I feel like we have a really good shot at bringing home the region championship to LC this year.”

“…We are looking forward to Tuesday and the 15th Region tournament at Johnson Central.”