I think I was already six-year old and in the first grade when my teacher, Miss Armstrong, had us practice drawing spooky pumpkin faces on paper. After much work and ‘start-overs’ our work was beginning to look like those Halloween Pumpkins we were seeing on Hallmark Cards, TV promotions and programs, and store-front windows. The next day she told us we were going to have a contest in carving pumpkins! I cannot but think that I had done this before with my mom, but it had been a year or more so those memories that today are so weak were weak even then. We were to wear clothes or bring aprons so to avoid the mess that would surely soon cover us kids. There would be adults there to do some of the actual cutting, but we’d get our hands into the stringy guts of the pumpkins and be responsible to draw out the facial plan. I have no idea who won or what kinds of success we had, but I do remember putting candles inside them, and turning of the lights which revealed the glowing smiles of those evil-looking pumpkins. When I got home that night I told mom the details of the day’s events and she immediately took me out to find a grand pumpkin for our front porch. 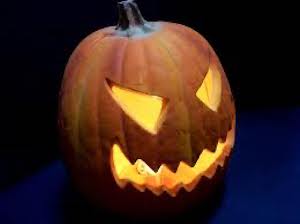 It was approaching the night that we kids were dressed up in costumes with masks to hide our identity as we roamed the town saying the phrase, “Trick or Treat.” The neighbors would put up such a fuss laughing or pretending to be scared. They quickly gave us candy, cookies, popcorn, or fruit that would ensure we would not rub our soap on their windows. I can’t argue with those who today take a dim view of teaching kids to threaten others to get something, but that was life back then. It turned out that we weren’t ‘Robin hood’ types because we didn’t share our spoils with others. Many hid the candy under their beds or other places with the idea they’d revisit the goodies when they could. Some found ways to visit a lot, while others stuffed themselves with sweet delights only to suffer with stomach problems later on. I cried over the cost of overeating and made vows to ‘never do this again.’ Of course, a year later we’d all be back at it.

I remember those masks we could buy down at the ‘corner store.’ They would serve their purpose for an hour or so, but then the holes for the mouth would become moistened enough they would come apart. I remember they sometimes had faces of famous people, but also some showing vampires or scary characters.

Today there are folks out there today that have real talent in pumpkin carving. The resultant faces are detailed with carving tools that allow the finest presentations. Some even have messages carved and impossible shapes that are truly an art form. I have no idea how this practice came about. There’s mention on the web that we got this from ‘Druen rituals’ back in England generations back. Eh, who cares? It is fun dressing up, bobbing for apples, and hiding our candy under the bed. Olf, I need a taller bed! 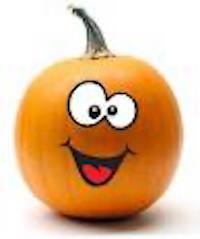 I remember many years ago when my kids were growing up that I painted faces on pumpkins instead of carving them. Frankly, the reason was that my wife wanted to bake the pumpkins later and cutting them would tend to spoil them. I painted several pictures and put them on the front porch. We lived in a house in those days that was on a major road. It wasn’t long before people stopped and asked if I would sell those wonderful painted faces. Of course, I did and made deals with local farmers to supply pumpkins. I sold and painted more, then painted more and sold those. I painted dozens of pumpkins and began to see them here and there around town. The money earned in the first season enabled us to visit a theme park with the kids. The next year folks stopped by and asked me to do some again. I did, including one order for a bunch to be used as favors at a convention. Wow!

Sadly, painting that many got to be ‘work.’ I think I quit the third or fourth year and we finally moved to another home. While this was going on we were blessed, but not doing that was a blessing, too. I see the faces, and more like them, in shopping centers, magazines, and all around. Likely, at the same time others were already doing this, but it seems common today.

I’m pleased to have the memories of growing up and enjoying the season. With a pandemic we have to wear masks anyway, so it fits that artists will find new ways and new looks. Perhaps we will all look like politicians, movie stars, monsters, or space invaders. I just read an article about the Orson Wells production of “The War of the Worlds.” While this happened just before my time, I certainly heard about it and have seen TV documentaries on that event. I guess we sometimes like being scared or like to scare people. Seems a bit harsh and unnecessary, but still we remember so many of the old movies like “The Monster from the Black Lagoon,” and “Psycho.”

Well, carving a face in a pumpkin suddenly seems harmless, especially if they are happy, smiling faces. Here’s your chance to make some of those, add a scarecrow and fancy up your pandemic masks.