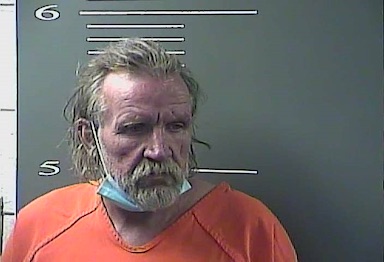 CORBIE A. FYFFE, WAS ARRESTED FOR ALLEGEDLY MAKING REPEATED THREATS TO KILL A PUBLIC OFFICIAL IN LAWRENCE COUNTY.

A man from the southwestern area of Lawrence County has found himself in hot water, after he was arrested for threatening to kill a Lawrence County, Ky. Constable, according to law enforcement officials in Lawrence County.

According to officers with the Lawrence County Constable Office and detectives with the Kentucky State Police, they stated that they charged Corbie A. Fyffe, 57, of Blaine, Ky., after he had made multiple threats to shoot District 3 Constable Daniel Castle.

Constable Castle had arrested Corbie Fyffe twice in the past year; on September 24, 2019, Castle arrested Fyffe on the charges of:

• POSSESSION OF MARIJUANA. Then on July 22, 2020, Constable Castle arrested Corbie Fyffe again; on the charges of:

• POSSESSION OF A CONTROLLED SUBSTANCE,

• LICENSE TO BE IN POSSESSION,

• IMPROPER OR NO WINDSHIELD.

When Corbie Fyffe was arrested for his latest trouble, officers say Fyffe was in possession of a substance that they believed to be methamphetamine.

As of for his latest trouble, Corbie A. Fyffe was only charged with:

• INTIMIDATING A PARTICIPANT IN THE LEGAL PROCESS.

Fyffe was not given any drug charges right now, as the KSP will send the possible meth they found on Fyffe to the State Police Crime Lab for a definitive result, and if so, that evidence would be then brought forward to a future Lawrence County Jury for possible indictment.

Constable Daniel Castle gave thanks to Lawrence County Sheriff Chuck Jackson and deputy Joe Osborne, who was listed as the arresting officer on the arrest citation, had also helped with this threats investigation.