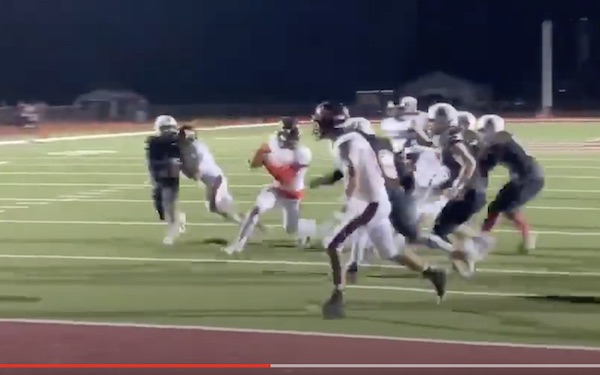 The Dawgs turned it over on downs and fumbled on their first two possessions before Senior Nick Collinsworth picked off a Hornet pass and returned it to mid field, Sophomore Dylan Ferguson rumbled down time the 2 yard line and Junior QB Alex Strickland called his own number for the first score of the year on a two yard keeper, Junior Logan Southers booted his first ever PAT and LC led 7-0 with 2:59 to go in the first quarter.

#8 Dylan Ferguson is fired up after his 47 yard run in the first quarter Friday night against Magoffin Co. #22 Jake Derifield and #55 Trace Longstreth come over to congratulate. 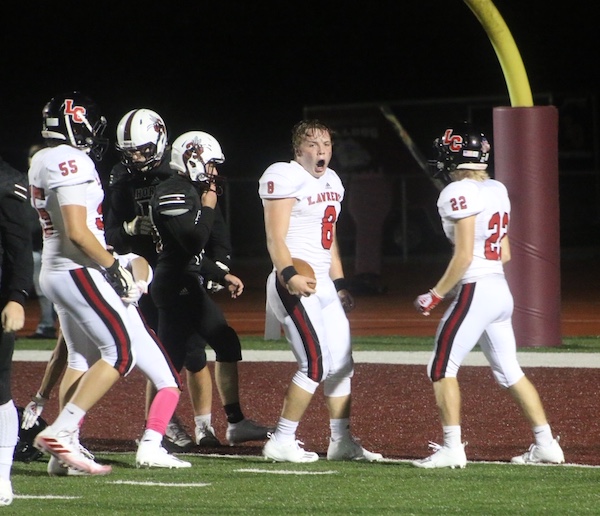 After a short MC possession and just 30 seconds into the second quarter Ferguson hit pay dirt from 14 yards out to make it 13-0.

Senior Danny Hall made a leaping interception near the goal line with under a minute to go before halftime to kill the Hornet momentum and set the halftime score of 13-0.

In the third quarter the Bulldogs would explode for 26 points as Strickland scored his second TD of the night this time from 3 yards out and Junior Blue Fletcher tacked on the two point conversion run to make it 21-0 early in the third quarter.

#80 Ethan Fields lifts up #13 Blue Fletcher after his touchdown run. #55 Longstreth and #64 Tyler Bowens look to join the celebration. 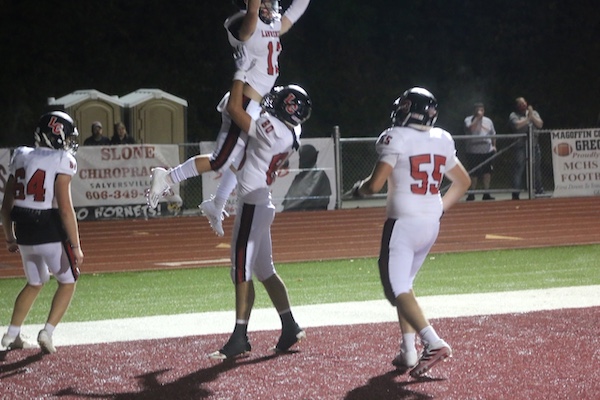 Strickland scooted in for his third score from 6 yards out with 36.9 seconds left in the third to make it 33-0.

#11 Alex Strickland made his first career start under center and scored three touchdowns. 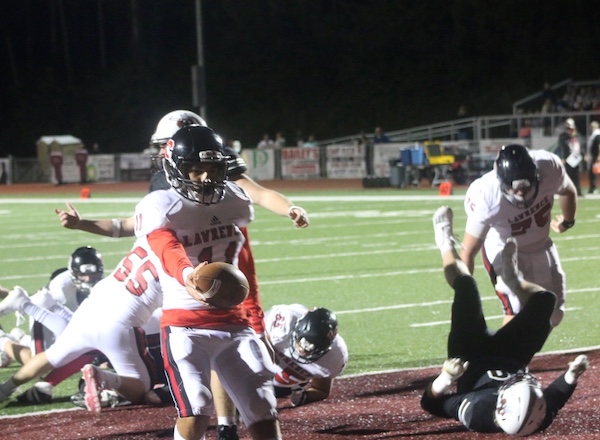 Freshman Talon Pollack recovered the Bulldog kickoff deep in Hornet territory and in the last play of the quarter Ferguson plowed his way in from 3 yards out to make it 39-0 and start the running clock in the fourth and set the final score.

Sophomore Ryan Marcum made a nice interception late in the fourth to preserve the shutout.

Junior Douglas Hall picked off a pass and recovered a fumble.

The Dawgs rushed for 334 yards and averaged 7.6 yards per carry.

A defense that was much maligned last season was flying all over the forcing 4 turnovers and the Hornets into long third down situations all night. The squad was playing fast, attacking and gang tackling. 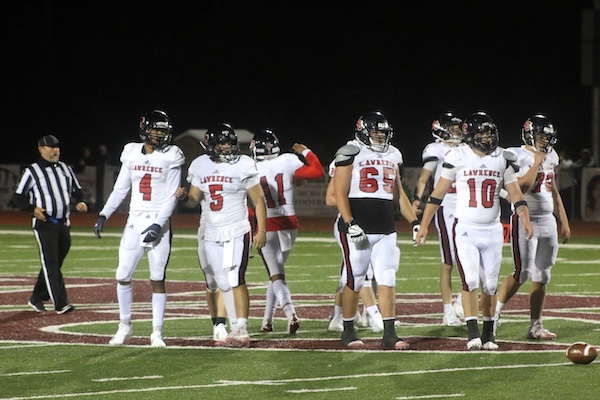 The Bulldogs will play their home opener against Pike Co. Central ( 2-2 ) in another key District matchup next Friday night. The Hawks beat LC twice last season.

The Hornets will travel to Floyd Central ( 2-2 ) next Friday night for another District game.

“… Our guys were extremely hungry and excited to get back out on the field after such a long delay. No doubt we have had some adversity getting going this fall, but I believe we were well prepared going into last nights game. That is a testament to our players and our coaches. Our focus and attention to detail up to this point has been very strong.”

“… Very proud of Alex and our team. We have had roughly 20 practices to prepare for our first game. Proud of how we played last night for the first time out, but I expect us to get better each time out.”

“… I thought our offensive line controlled the line of scrimmage. Ferguson, Fletcher, Douglass Hall, and Strickland all ran hard and blocked well for each other.”

“ Defensively, I thought our guys flew around and did a great job vs the run and the pass. Magoffin County is a good team, with some very explosive players, and we were able to contain them. Coach Botkins, Coach Reeves, and Coach Johnson had a great plan and our players executed the plan very well last night.”

“… I’m proud of my team for stepping up. We had some young guys in there and they definitely did their share of work out on the field Friday night. Starting out the season late due to one of the coaches getting COVID-19 had a lot of us discouraged. I’m proud of everyone on the team for staying focused and not getting distracted by everything going on. With that said each week is uncertain and there are many things going on in this world that could take this game away from us in a snap of a finger and I know my boys are up for the challenge.” all in lc