Inez Deposit bank has two branches in Martin County, and two in Lawrence County.  The institution has approximately $700 million in assets, $400 million in loans, and $600 million in deposits.

Each institution’s Board of Directors unanimously approved the agreement and merger.

Mike Duncan, President & CEO of Inez Deposit Bank stated, “We believe this merger with First State Bank, another locally owned and managed community bank, will be beneficial for everyone involved.”

First State Bank’s president says his company happy to get into Kentucky.

“We are excited about the acquisition of Inez Deposit Bank, which allows us to expand our presence into the commonwealth of Kentucky and further our vision to be the premier financial institution in our communities. We are dedicated to providing exceptional customer service and high-value products to our customers,” said Mike Pell, President and CEO of First State Bank. “This acquisition is a great fit both financially and culturally, and will allow us to continue to offer outstanding service to our existing customers as well as new customers in this region of Kentucky.” 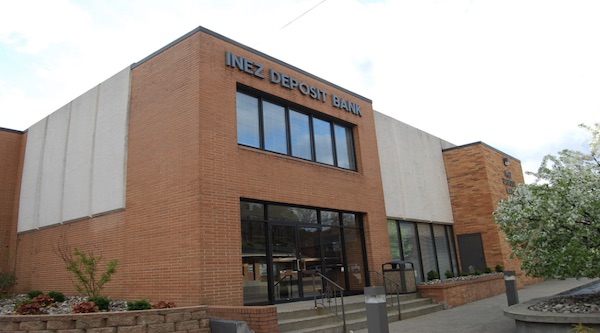 Chartered in 1904, Inez Deposit Bank opened its doors with two employees and $15,000 in capital. During the first half of the twentieth century, the bank experienced a steady but modest growth, as did its service area of Martin County, Kentucky and Western Mingo County, West Virginia. In 1967, the Warfield Branch opened to better serve the bank’s many customers on the eastern portion of Martin County and Mingo County. During the seventies the region witnessed unprecedented growth with the expansion of the coal  industry. The Inez Deposit Bank grew at a phenomenal rate, with assets increasing over four hundred percent. The bank’s  employees increased from fourteen to forty. This remarkable growth continued until the mid-eighties. Beginning in 1985, the area experienced declining economic conditions due to the depressed coal market. Despite these economic challenges, management instituted plans to insure continued growth and prosperity in this changing market. New services, loan products, and savings accounts were added. Management participated in secondary mortgage market lending and opened Loan Production Offices in Hazard during the nineties.

The First National Bank of Louisa, now Inez Deposit Bank, FSB, was founded in 1891 and is the oldest bank in Lawrence County. The development of the bank has paralleled the growth of Lawrence County and the surrounding area. Throughout the early and middle portions of the twentieth century, the bank experienced a modest but steady growth.  In 1972, a spacious new bank office was constructed in downtown Louisa. The booming coal operations in the surrounding areas generated a period of growth for the bank from the early seventies until the mid-eighties. The bank was acquired by Community Holding Company in 1985 and has continued to grow with the area. In 1997, the charter was converted to a Federal Savings Bank and the bank’s name became Inez Deposit Bank, FSB.  The ownership of Inez Deposit Bank, FSB was acquired by Community Thrift Holding Company, an affiliate of Community Holding Company,  in April, 1999. The Pikeville Branch was subsequently closed in 2008, and a new branch was opened in Louisa in the fall of 2008.

BESHEAR REPORTS STATE ON PACE FOR ITS SINGLE HIGHEST WEEK EVER