GROWING UP IN LOUISA: A Musty, Oily memory 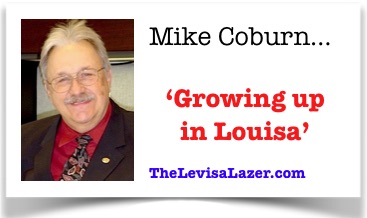 I remember a time when mom took me by the hand and walked me from our home on Clay Street up to the high school campus. Most of those kinds of trips were to see a sports event; Bulldogs vs somebody else. One was to see a wrestling match and another, donkey basketball, both being held in the gymnasium housed within the new building. When revisiting these memories, somewhere, deep in the foggy vaults a darker recollection seeped in my consciousness begging for attention. This one differed because it was in the old ‘normal college’ building that I had little reason to visit, just yet. Climbing the broad wooden stairs we came to a landing that turned up more stairs until we achieved a wide second floor vestibule. From there I saw crowds of people in what became known to me as the auditorium.

I was but a young preschooler at this time, so what I was seeing from a diminutive perspective was new and certainly a mystery. I took all these things in with eyes spread wide. I continued to hold onto mom’s hand finding comfort that it was safe to continue into this strange environment. Mom greeted people she knew and led me to some seats that were different than any I had seen before. Made of cast iron and plywood the seats were connected and attached to the hardwood floor. I figured out that the seat could be lowered by hand. The maneuver to make this happen was really just one smooth swinging motion. The seat bottom was shaped with a slight curve that echoed the human form, making it a natural fit. It would be only a few minutes more when I discovered that a desk surface was folded down between my seat and mom’s that could be brought up and positioned across my lap to provide a smooth writing surface. Those were convenient for right-handed scribes, but I think maybe less so for folks like my friend, Billy Elkins, who was left-handed.

I had seen vintage desks in the grade school building also made of iron and wood, but the desks were of another design that had a fixed writing surface. I remember them having a round hole. I was told its purpose was to hold a container of ink. Apparently, students in earlier days wrote with quill-like pens that required constant refreshing of ink to work. It was why ‘ink-wells’ in schools, banks, and courthouses existed. I remember stories of a boy reaching and taking a girl’s pigtail and dipping it in the ink. While I never saw that happen during my school days, I did have ink and a pen at home with which I wrote many pages of poor prose for my personal entertainment. Alas, those notes are gone and forever lost to history. I think we are likely blessed they are but a slight memory. 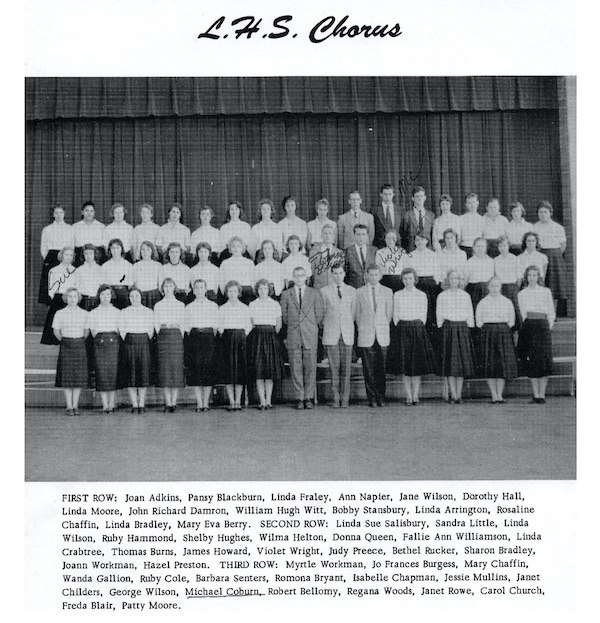 If I remember correctly, mom’s purpose in bringing me to the grand auditorium that night was to see a school play. I know she cautioned me numerous times to ‘be a good boy’ and not to create noise or distractions. She need not have feared because I was utterly taken by the performances taking place on the big stage. I think the word ‘mesmerized’ nails my status as I sank deeply into my seat among the numerous people making up the audience. I don’t remember the play or anything else, and wonder yet how we came to leave later that evening. Perhaps I dozed, or maybe drifted off into one of those daydreams that occupied my mind during those days. You may not believe it, but I still battle to stay focused even now.

This grand auditorium was the largest single room I had experienced in my life until I later went to see Roy Rogers on stage in Huntington, WV’s field house. Over the years, and especially during my high school days, I saw this second floor space at the high school nearly every working day. In time I would play with the LHS band on this stage and sing in a chorus. I would also act in a play from this very stage during my senior year.

I was recently reminded by Fred Jones that he, Johnny Bill Boggs, and others from the percussion section of the concert band had to carry the tympani (kettle drums) down the fire escape from the third floor band room. After they had maneuvered them into position on the stage, the floor boards were straining from the weight. No damage was done but it was scary I’m sure. Whoa!

It was common practice in those days to invite visiting VIP’s and dignitaries to address the student body. While none of us were of voting age back then, we heard many representatives and senators giving out their advice to each respective generation, as best they could.

The auditorium was the venue for all kinds of assemblies, presentations, and practices. I recall the pep rallies that were held prior to each football or basketball game. Cheerleaders would leap and holler while shaking their pom-poms. They led us into a frenzy of patriotism and school spirit as we sang the ‘fight song’ that we knew from memory. The balconies on either side were on a third-floor level so every student could find a place to watch and join in the revelry. The place was full and the noise was loud, indeed. Teachers took positions in the back and all around in strategic positions to insure running and other bad behaviors would be nipped. Likely as not, they saved the old building and a number of lives over the years.

The Superintendent of Lawrence County Schools, William A. Cheek, was also an adult Sunday School Teacher at my church, the big Methodist Church then located on Courthouse green, on the corner of Madison and Main Cross. As a dedicated educator he was clearly concerned with the well-being of all the students under his charge. Bringing up each generation with proper exposure to academia, arts, good literature, responsible behavior and spiritual awareness, were his goals. As such, he would invite the evangelists that were visiting town in crusades or revivals to come and speak to the entire student body. This, of course, was years before it was decided that it was illegal to teach or share the Gospel in school. We prayed before ball games and I’m sure many a student prayed before taking exams.

Two events happened during my tenure that I’m sure any student who was there will remember. The first was when addressing the students just after a new fall session had begun. He wanted to instill an understanding of the effects of not following direction. He reminded us that walking on the grass instead of the sidewalks would destroy the lawn. To prove it he had the entire student body to march single-file out the front door of the school, across the lawn to the flag pole and back to their seats in the auditorium. The worn path remained for years as a reminder to follow the rules.

The second event was when he stepped behind the podium and gave from memory a rendition of a poem by Myra ‘Brooks’ Welch. Titled “The Touch of the Masters Hand,” Mr. Cheek spoke softly at first. Students and adults alike were quiet as he uttered the following words:

“T’was battered and scarred, and the auctioneer thought it scarcely worth his while to waste much time on the old violin, but held it up with a smile; “What am I bidden, good folks,” he cried, “Who’ll start the bidding for me? A dollar, a dollar”; then two! Only two? Two dollars, and who’ll make it three? Three dollars, once; three dollars twice; going for three… “

“But no, from the room, far back, a gray-haired man came forward and picked up the bow; then wiping the dust from the old violin, and tightening the loose strings, he played a melody pure and sweet as a caroling angel sings.”

“The people cheered, but some of them cried, “We do not quite understand what changed its worth.” Swift came the reply: “The touch of a master’s hand.”

“And many a man with life out of tune, and battered and scarred with sin, is auctioned cheap to the thoughtless crowd, much like the old violin. A “mess of pottage,” a glass of wine; a game – and he travels on. “He is going once, and going twice, He’s going and almost gone.” But the Master comes, and the foolish crowd never can quite understand the worth of a soul and the change that’s wrought by the touch of the Master’s hand.”

I remember this musty old building and especially the auditorium and the activities that might on one day bring laughter and another honor, and who knows, maybe for some, salvation. The building is gone, the mission has changed, but our memories live on. Thanks to those who made it possible.

New digitally printed, flat surfaced license plates are in and ready to make their debut on Kentucky vehicles