CHASE BEGAN AFTER TRAFFIC STOP ATTEMPTED WHEN DRIVER WAS CAUGHT GOING 100+ MILE PER HOUR, NEAR TWICE THE SPEED LIMIT FOR U.S. 23 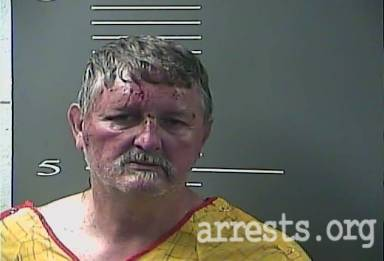 RED FACED ARE WE NOT? TOO MUCH SUN…OR PEPPER SPRAY? HANK RICHARD MULLINS, WHO WAS ARRESTED MONDAY NIGHT AFTER WILD POLICE CHASE IN LAWRENCE COUNTY.

A West Virginia man led state troopers on a pursuit in southern Lawrence County that ended in a crash,which was the second one involving the fleeing driver.

According to the arrest citation report; Kentucky State Police Trooper Forrest Newsome stated that he clocked a passing vehicle being driven by an individual, later identified as Hark Richard Mullins, 49, of Newtown, West Virginia, going at 102 miles per hour on U.S. 23. Trooper Newsome turned on his blue lights and that is when Hank Mullins took off and turned onto KY. 645.

KSP troopers stated that during the pursuit, Hank Mullins lost control of his vehicle and hit a ditch, causing it to lose its back bumper, but Hank Mullins continued his fleeing until he came to an abrupt stop.

As trooper Newsome approached the vehicle, Hank Mullins drove off again. After traveling several side roads, Mullins lost control of the vehicle and hit an embankment at the intersection of KY 645 and KY 2033.

Hank Mullins was arrested by Trooper Forrest Newsome, and was charged with 9 offenses total, as the following:

Hank Richard Mullins was transported to Three Rivers Medical Center in Louisa to be treated for minor injuries. Mullins was eventually transported to and lodged at the Big Sandy Regional Detention Center in Paintsville on Tuesday morning, and booked officially at 2:12 A.M.

Here is the official KSP report:

The vehicle lost control and struck a ditch causing it to lose its back bumper but continued traveling until coming to an abrupt stop. As Trooper Newsome approached the vehicle, it then accelerated from the scene. After traveling numerous roads, Mr. Mullins lost control of the vehicle and struck an embankment at the intersection of KY 645 and KY 2033. Trooper Newsome was then able to take Mr. Mullins into custody without incident and charged with the following:

Fleeing or Evading 1st Degree, Possession of a Handgun by a Convicted Felon, DUI and other traffic violations. Mr. Mullins was lodged at the Big Sandy Regional Detention Center.