SINGLE INCLUDED ON REAL ME, TAYLOR'S DEBUT ALBUM TO BE RELEASED NOVEMBER 20 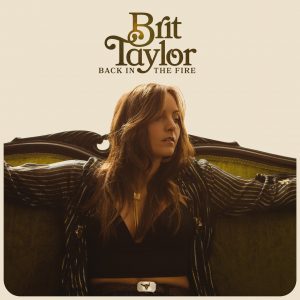 Nashville, TN – “Emerging Americana artist with the luscious alto tone” (American Songwriter) Brit Taylor, who burst onto the scene earlier this summer with the release of her debut single “Waking Up Ain’t Easy,” has joined with the powerhouse writing team of The Black Keys’ Dan Auerbach and legendary songwriter Pat McLaughlin for her new single “Back In The Fire.” The single from the Eastern Kentucky native is slated for release on September 4 and will go for radio adds on September 28.

“Back In The Fire” is a light-hearted admission in a purple-hued musical kaleidoscope of a heart gone astray that returns again and again to a love gone bad and follows the success of Taylor’s first singles.  “Waking Up Ain’t Easy” is currently featured on Spotify’s Pulse of Americana and Indigo playlists, among such staples at Margo Price, Jason Isbell and Joy Williams.  It received critical acclaim and was followed by the catchy up-tempo “Wagon,” which is in rotation on Spotify’s New Music Nashville playlist.

Pre-save “Back In The Fire” here.

“I knew better, but I’m stubborn,” Taylor said of “Back In The Fire,” which has autobiographical notes.  “I think we’ve all been there, where we keep going back to someone or something over and over again even though we know it is just down-right bad for us.”

Writing with the acclaimed Dan Auerbach and her hero Pat McLaughlin was a dream come true for Taylor.  She found the experience exciting, enlightening and educational.  The three pros easily found common ground – as musicians, songwriters and fans of country icon Bobbie Gentry.  With Auerbach playing riffs on a gut-string guitar, the lyrics and melodies just flowed.  The result was a musical eye roll of self-reflection that plays counter to any normal formula.

“It was my first day writing with the two of them so I was crazy nervous,” Taylor said.  “To make it even more intimidating, we wrote the song at Dan’s studio, Easy Eye Sound, in Nashville, and all his Grammy awards were there, just staring me down.”

The same day that Auerbach, McLaughlin and Taylor completed “Back In The Fire,” they found another groove and the song “Real Me,” the title track of Taylor’s much anticipated solo album, was born.  Real Me, releasing on November 20, promises a unique vulnerability that is both empathetic and empowering. About Brit Taylor

Brit Taylor is an emerging traditional voice in country music who writes and sings songs from her heart that creep into the soul and that soothe in the deepness of sleep. She combines her sultry voice with the richness of her beloved strings to tell stories of love and longing, of despair and hope. Her music tells stories of everyday life.

Following high school graduation, the Eastern Kentucky native packed her bags and her dog and headed to Tennessee to pursue her music career. Four years later, with a college degree in music business in hand, she transitioned her college internship into a four-year publishing contract with Cal IV (now Spirit Music). Her time at CALIV/Spirit was spent learning from the best. Brit wrote with numerous hit makers like Marcus Hummon and Phillip White.

However, in 2017 life hit Brit hard. Brit’s life’s storms proved to be just what she needed to set her back on the track she was intended to be on. She decided to make the music she heard in her soul. After 10 years in Nashville, she started over as a solo artist and quickly realized it was the right decision for her. Recognizing her talent and successes, top professionals welcomed the opportunity to work with her.

She joined with Nashville legendary rock-star/producer Dan Auerbach and together they penned eight songs. Dave Brainard, the highly acclaimed Grammy-nominated producer, made her dream and the songs a reality. Her debut single “Waking Up Ain’t Easy” combines the emotional keenness of her songwriting, her sultry voice and superb musicianship.  It was released June 5 to critical acclaim from Billboard, Music Row and American Songwriter Magazine.  “Wagon,” her second single, was written with Marcus Hummon and is an anthem to saying goodbye to all that’s wrong and embracing all that’s right in a playfully angsty, down-home colorful foot stomp.

The power of Brit’s music is that it is refreshingly simple yet surprisingly complex.  She combines the emotional acuity of her songwriting with her rich alto to create music that, through words and sound, has a unique vulnerability and strength. It is always 100% Brit Taylor – empathetic, empowering, intoxicating – and as authentic as she is.