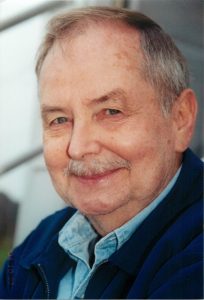 Tommy Joe Caperton, 89, of Louisa, KY went home to be with the Lord on Wednesday, August 26, 2020. Tommy was born November 13, 1930 in Louisa, Kentucky to the late Grover and Minerva Marcum Caperton. In addition to his parents, he has been preceded in death by one grandson, Joshua Marcum.

He is survived by his wife of more than 67 years, to whom he had unwavering love and devotion, Fannie Caperton; as well as one son, Steve (Shaye) Caperton; three daughters, Sherry (Roland) Gariepy, Libby (Robert) Marcum, and Elaine (David) Carmody; four grandsons, Jordan Pigg, Matthew Marcum, Andrew Carmody, and Evan Carmody; and one granddaughter, Casey Gariepy.

Tommy was a master plumber and pipefitter.  A lifelong member of the Plumber’s and Steamfitter’s local in Ashland, KY.  Tommy’s work motto was “never turn down any hour of overtime.”  He was an avid golfer, fisherman, and bowler, even placing 10th  in the nation at a senior bowling tournament in Reno, Nevada.  Tommy dedicated his life to the Lord over 40 years ago.

The family wishes to express their heartfelt appreciation to Community Hospice of Ashland, the Sanctuary of the Ohio Valley care facility, and the Hershel “Woody” Williams VA Medical Center for their compassionate care.

A graveside service with full military rites will be conducted at 2pm on Sunday, August 30, 2020 at the Maynard Family Cemetery in Louisa, KY with his son, Steve Caperton officiating. All care has been entrusted to the Wilson Funeral Home.