A Debord man faces manslaughter charges after the overdose death of another man late July.

Christopher Newsome, 28, is charged with second degree manslaughter and trafficking in a controlled substance. 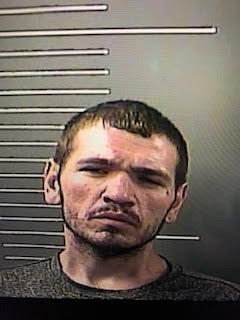 of Warfield was found dead July 30 inside an apartment at the Dempsey Housing apartment complex. Kentucky State Police say Newsome’s involvement is believed to be in Marcum’s death. Newsome is currently lodged at the Big Sandy Regional Detention Center.

A Martin County man was arrested this past mid-week after leading deputies on a late night high speed chase on his motorcycle and was found  with what appeared to be drugs on him, now find himself in WAY DEEPER legal trouble after he was served with an indictment for manslaughter while incarcerated for police chase troubles.

Christopher Ray Newsome, 27, of Debord, now finds himself facing a total of eight charges including five felonies. The first six charges come from his police pursuit of him on his motorcycle.

According to an arrest report from the Martin County Sheriff Department, on late Wednesday night, August 26, deputy David Adams tried to make a traffic stop on Christopher Newsome after he didn’t use a turn signal while driving on a motorcycle.

When deputy Adams activated his lights, the report said Chrsitopehr Newsome took off at high speed before the intersection of Lovely and Northwolf Creek.

Deputy Adams stated that during the pursuit by him and other officers, Christopher Newsome  was clocked going as high as 105 miles per hour on the motorcycle, when he eventually finally stopped at Moores Trailer Court, saying to the deputies after he was apprehended by them that he eventually realized and knew while he fleeing he would not be able to get away from them.

The arrested reported that deputies found Christoher Newsome had scales and a clear crystal-like substance in a bag in his boot.

Christopher Ray Newsone was transported to and lodged in the Big Sandy Regional Detention Center in Paintsville on Thursday morning, August 27, at 1:14 A.M.

On Friday morning, August 27, Kentucky State Police serve two warrants on Chrisotpher Ray Newsome while he was still booked at the jail; one for a manslaughter charge and the other a drug trafficking charge after the overdose death of another man late last month,

Christopher Newsome was charged with *MANSLAUGHTER SECOND DEGREE; and *TRAFFICKING IN A CONTROLLED SUBSTANCE, 1ST OFFENSE (CARFENTANIL OR FENTANYL DERIVATIVES).

KSP Post 9 detectives from Pikeville reported Ryan Marcum, 27, of Warfield, was found dead July 30 inside of an apartment complex.

THE DECEASED: RYAN MARCUM, 27, FROM WARFIELD, WAS FOUND DEAD FROM AN APPARENT OVERDOSE ON JULY 30 AT AN APARTMENT IN MARTIN COUNTY.

The officers claim Chrisotpher Newsome’s involvement with drugs with the victim is believed to be related directly to Ryan Marcum’s death.

Christopher Ray Newsome is still being held at the BSRDC on a $10,000 full cash only bond.

Wade Queen contributed to this story…
ShareTweetShareSendPinShare
Next Post