GROWING UP IN LOUISA…Lotteries and Gaming

When I read and mostly understood the article in the Lazer describing the legal issue of using certain machines in Kentucky for ‘Vegas-Style Gaming.’ I wondered about how society now believes that somehow a conservative viewpoint is an affront to freedom to enjoy our civil liberties. The little town I remember was staunchly in favor of restricting not only gambling, but drinking and other vices that too often hurt our free citizens and their families. Well, this change happened like anything else; one small step at a time.

There’s nothing new about chipping away at laws that once kept us safer than we might have been anyway. Honestly, legislating morality is an unfriendly sport that often falls into its own ashes. In the case of the ‘freedom to gamble’ the whole country has undergone tremendous changes, or at least come to the place where the associated shame is dismissed. Casinos was once an activity centered in Vegas, Reno, or Atlantic City. We now have casinos in nearly every state. Sometimes this is done under the cover of tribal laws by Native Americans, or by referendums after long campaigns filled with claims and counterclaims. Sadly, bad behavior comes naturally to humans and will likely ‘win out’ over time. More sadly, the fruits of exercising these liberties are rarely favorable to the masses. You see, ‘the house always wins.’

I was thinking back the other day about things my grandmother warned me about. For one thing, she admonished me to never, never gamble. In this instance, I thought I had done very well by her instruction. Then I soon began to remember the little things that may have fit the definition. Certainly we all know that feeding coins into a ‘one-armed bandit’ in a casino is gambling, but as a kid there were other things such as risking our best marbles on the grade school playground and buying into drawings and raffles. These memories caused me to think about the less obvious ways I was suckered when I was growing up. Also, for a time when in the service I played ‘payday stakes’ in low-dollar poker. I learned to change this habit when I my paycheck was entirely used 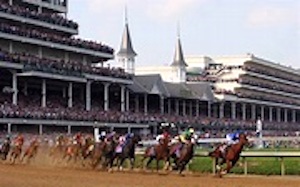 up to pay my losses. I quit ‘cold turkey’ and no longer was drawn into this expensive pastime.

We get it honestly, I suppose, because we grew up with a generation where betting on horse racing was a way of life. I remember a story about my great grandfather who had friends that sold the old doctor a race horse, but didn’t tell him about the horse’s training. The first time he mounted, the horse took off! Granddad came walking back later leading the horse home. Luckily no one was hurt.

Granny claimed gambling was a tax on the poor, but I think that as much as losing may hurt the poor, there are plenty of the world’s most wealthy who line up to place their wagers. The Kentucky Derby held each year at Churchill Downs is famous the world over and attended by thousands. Many of those are the rich and the famous. Her Majesty the Queen of England attended at least one, and maybe two! All around the world people are glued to their television sets to watch the race of races. Stephen Foster, called America’s First Composer, immortalized horse racing in song with the minstrel ‘Camptown Races.’ Mr. Foster was also the same writer of our state song, ‘My Old Kentucky Home.’ He knew something about the excitement of making wagers and taking home the prize.

Even so, I don’t fully understand why in this day of enlightenment that people ‘invest’ their money in games of chance. Thinking back to my early years in eastern Kentucky I realize that back in the good old days we were not at all immune to taking chances. We hoped for that non-existent free-lunch that never came. During those days just after the great depression and before the end World War Two, great crowds of people gathered on the streets downtown when it was time to draw the ticket that would enable the lucky winner to take home a brand-new automobile. I’m thinking that cars didn’t cost much compared to today’s prices so a thousand or more people buying tickets would soon pay the dealer’s cost. On top of that the publicity was great! What we don’t know is whether the dealer made a profit. If so, maybe they gave it to a local charity, or maybe not. 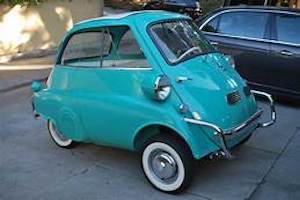 It was in my day in the mid-fifties that a raffle for an Isetta was won by one of our citizens. Someone told me it was J.Walter Thompson, one of my business teachers at LHS. He and his family attended my church. I remember seeing that funny looking front-loading automobile at the time of the lottery. I don’t remember seeing it afterward. I assume it may have been sold right away. Maybe some reader can tell us what happened.

I will never forget my heart-break when the IGA store (I think) on Madison Street sold tickets on a palomino colt that had been kept behind the store. You see, for a couple of weeks or more I went over to pet the pretty animal and feed him a few sugar cubes.  He seemed to like those and an apple here and there. When it became time for the drawing a local farmer took the pony away. He was happy but I was destroyed. It was a sad week or so before I finally allowed myself to become distracted by something else. ‘You win, you lose, but life goes on.’

Strictly speaking in those days gambling was not legal, but most ‘fund-raisers’ somehow squeaked past law enforcers because, after all, it was for charity. Well, maybe not all the games that were floating about, but some did finance good causes and were ‘penny-ante,’ that would not have been popular with the public. They weren’t worth the effort to chase down and put to an end. Like anywhere else we had our big crimes going on, such as chicken-thieving, and trespassing. Why, there was even a murder or two and lots of moonshining. What was a lawman to do? Besides, he had just as much chance of winning as anyone else.

It is the nature of man to seek out his fortune, to provide for his family, and the good of the community. Even 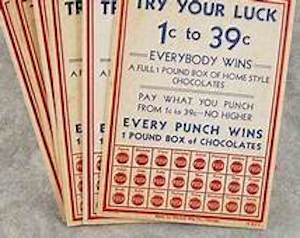 kids know that! One of the first kinds of elementary gambling that ever came to my attention were the ‘punch-cards’ where one could get two or three chances for a nickel. While not big money even in those days, a nickel could still buy a few things back then. Besides, it was the excitement of winning and getting more back than we had invested that made the difference.

In grade school some had those punch-outs where you’d pay your fee and be allowed to push out the tiny, folded bits of paper that would tell you what amount of money you’d won. I was suckered in a few times, but was lucky that I didn’t have much pocket change to spend. Sure, I won a time or two, but that’s the tease of gambling. You think you have a chance, but as I grew older I realized that the ‘house’ always won. These simple punch-out cards got attention. They sold chances to friends and anyone willing to try and win the big prize. I guess the seller could keep the profit. The risk to the seller was when the big prize was found too early. That made it impossible to sell the rest and make money.

Of course at grade school there were cake walks, but with those you didn’t have to buy chances. The same also applies to Bingo, except sometimes an operating charity offsets the cost for prizes with small charges. After all, the goal is to make money while having fun.

My intent is not to come down on what has become big business and has gained an amazing level of legitimacy in many states. I am just remembering the roots, as least as far as I recall that has given respect, somehow, to those in the trade. Back in my day we didn’t have casinos or state lotteries, but the question has been one of contention as the right and left wings fought to control license to gamble. I see ‘50/50’ drawings at ballgames and at convention meetings as nothing more grievous than volunteer donations to good causes. I also have to admit there’s a level of excitement as the numbers are drawn and our success or failures becomes known. I’m afraid that many a man went home to face his family after losing his paycheck.

While I don’t waste my money on the large national lotteries, I want everyone to know that I would welcome an anonymous gift of a winning ticket. I think most people occasionally dream of striking it rich. As a kid I dreamt of finding a pirates treasure or finding a lost wallet or diamond ring in my travels. Hordes of people have bought metal detectors. Some have found treasures, most have not. People sit glued to “The Mystery of Oak Island” on TV and can’t wait until the prize is finally discovered. Like everyone, I look for when ‘my ship’ may come in. But as I have gotten older I have no illusion of my chances of that really happening. I guess if I want to be wealthy I’ll need to do it the old fashioned way. I’ll just have to work and make careful investments. Even then it is pretty late to see any profits. Perhaps I could invent something that everyone needs so to provide income for my family for generations. I guess I shouldn’t bet on my chances of that happening.