Martin Co. ready to make another step after first winning season in a decade; Will open the season at Phelps September 11th

Cannonsburg, Ky. — After going 7-4 and having a winning record for the first time in a decade, the Martin Co. Cardinals are chomping at the bit for a deep playoff run in 2020 after meeting with the media Friday morning at the EKHSA festivities at the brand new Boyd Co. football stadium. 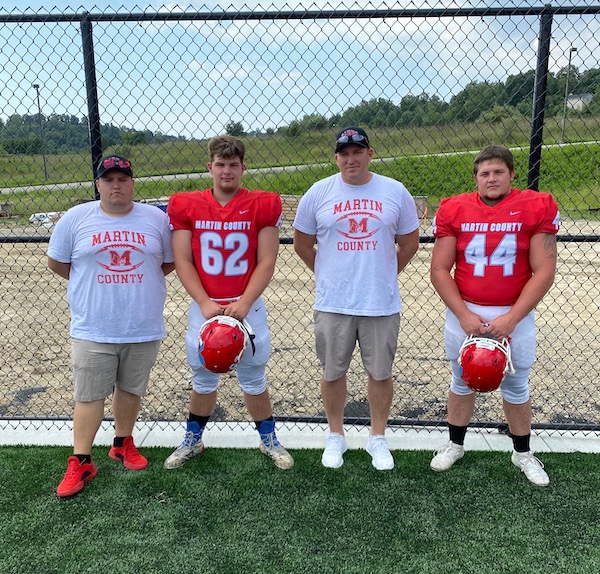 The Cardinals season ended at Shelby Valley with a 41-24 loss but it was a successful season under the guidance of Josh Muncy.

Martin Co. plays in the only six team District in the state of Kentucky with West Carter and Shelby Valley along with East Ridge, Prestonsburg and Bath Co.

“… We have been through some dismay with the closing of our high school and the name change it drained a lot of the school spirit from our community and out of the county but with opening of a brand new state of the art high school. The community was excited about that and the football team had a great season, Girls won a District title and the Boys Basketball team made it Rupp even though they didn’t get to play in the Sweet Sixteen. It is exciting times in Inez and Martin Co.”

“… We wanted to bring seniors to media day and the two we brought today have paid their dues and have been through a lot of stuff during the last three years. Our younger guys will be here one day. Jake Carter is our starting center and has been for three years. He is a good leader on and off the field, leads by example in the weight room, he also helps our younger guys and has put in the work. Branson Smith is a our starting middle linebacker and will also be in our backfield, he is outstanding in the community and on the field as well. Multiple sport athlete and all state wrestler as well. Both kids are model student athletes. We could have easily brought Colby Sparks or Logan Proctor both great running backs and dynamic athletes.”

“… We return four out of our five offensive lineman so our running game should be strong. We have a couple guys vying for the QB spot including a 6-3 lefty who has soft touch on the ball.”

“… Our District is tough with West Carter, Shelby Valley and Bath Co. with six teams in it it’s a real grind for our kids. All of the teams are physical and that makes it tough week in and week out. We are ready to get it going, we have a great schedule with some good teams coming to Inez.”