Cannonsburg, Ky. — Even though there is a lot of unknowns right now about high school football in Kentucky there was a little bit of normalcy Friday morning at the sparkling new Boyd Co. football stadium as 16 teams including Lawrence Co. and Martin Co. took part in the East Ky High School Association Media Day. 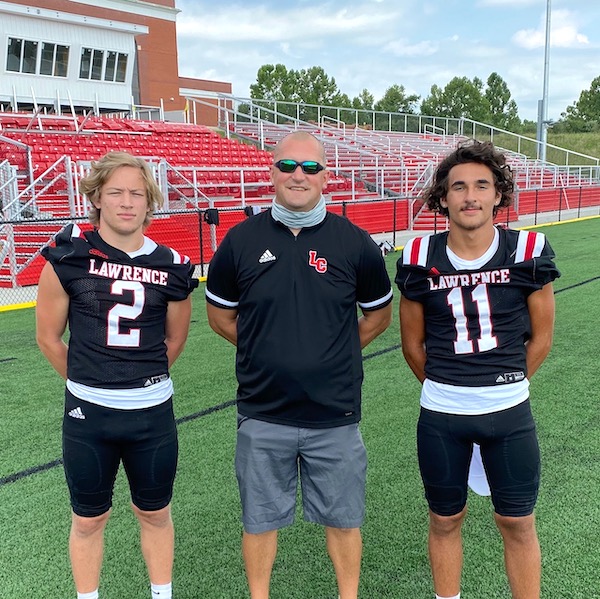 The young Bulldogs went 4-7 last season and were ousted in the first round of the playoffs 39-23 on the road at Pike Co. Central.

The Dawgs are supposed to open up camp Monday August 24th in Helmets and Shorts, progressing each week until the opener at Russell who went 9-3 in 2019.

Lawrence Co. is looking for a game on September 18th.

The Bulldogs lost games with Paintsville and two home games with Boyd Co. and Prestonburg.

“… We are very excited to get going, a lot of teams have question marks going into this season but we are fortunate enough to return about 90% on offense and 90% defense and get back a bunch of kids on both sides of the ball. I think our guys gained a bunch of experience last year along with some lumps that came along with that. I think we are ready to close some gaps and just do what we love to do.”

“… We better be ready right out the gate with the new schedule beginning Sept 11th at Russell which is a storied program that is led by TJ Maynard who does an outstanding job, then we get the Defending Class A Champion Pikeville Panthers before four straight District games then finishing up with Raceland and Rowan Co. it’s a real gauntlet as always. We will take it game by game and try to get better each week.”

“… Baden and Alex have done everything that we have possibly asked of them, they are model student athletes along with being model people as well. Both are quality individuals. It’s no secret that Baden had an unbelievable year in 2019 and we look for him to continue to be a leader and add to what he did last season. He got better and better. The game is starting to slow down for him and how much more he sees out there. Alex will have an expanded role this season, We think he was one of our best defenders last season and should make an impact in all three phases this upcoming season. He could have a real breakout year. We are thrilled to have both guys in our team.”

“… I’m excited to coach this team, we took some lumps last year but we think we have closed some gaps and are ready to show what we got. We start on the 24th and won’t be long we will be playing. We don’t have the benefit of a scrimmage this season so it will be full ho pretty quick.”

“… I’m excited to play that tough schedule, with the likes of Pikeville and Belfry who won state championships along with Russell, Raceland and Pike Co. Central it will prepare us for the playoffs.”

“… Playing QB you have to be a leader, you have to have your voice be heard, I enjoy that kinda role and think I thrive in those kind of situations. It’s my last year and I’m ready to make it the best one yet.”

“… For me personally other than the District game it has always been Raceland, we always play the same teams and we have alternated wins and losses the last couple years.”

“… We are just trying to stay focused on the field and in the weight room with everything going on, just do what we can to get better each day as a team and myself individually. We want to win a District Championship and make a deep playoff run. I’m trying to bring the team together and be a leader on and off the field.”

“… Excited to get back out on the field with my teammates and play the game that we all love. It’s been a tough stretch for everyone with everything going on.”