Nettie is the great-great aunt of actor Johnny Depp

by KENTUCKY FORWARD
in Arts & Entertainment, Recollections
Share on FacebookShare on Twitter
Lt. Gov. Jacqueline Coleman on Wednesday announced plans to unveil the first monument honoring a woman in the state Capitol. The new monument will be placed in the West Wing of the Capitol, as planned.

“In honor of the United States Women’s Suffrage Centennial August 18 and Women’s Equality Day on August 26th, today I’m announcing the first monument honoring a woman, Nettie Depp, in the state Capitol,” the Lieutenant Governor said. “The unveiling of the Nettie Depp monument will occur next year, August 21, 2021.”

Nettie Bayless Courts Depp was a pioneer in education in Kentucky, as a teacher, principal and elected school superintendent in 1913, seven years before women earned full voting rights in Kentucky. She advocated for improved education for every Kentuckian, regardless of gender or race.

“She was a true visionary in education reform and suffragist,” Lt. Gov. Coleman said. “The impact Nettie Depp had on her community is profound and can be felt a century later. May her life serve as a lesson to us all.”

She noted that the project began in 2014 and aims to redress a historical lack of honor and understanding of American history regarding women’s work, sacrifices, and untold contributions.

Depp was born in Barren County and began her career as a schoolteacher in Scottsville and became the first female superintendent in the county, seven years before women had the right to vote. She added music, art and business to the school curriculum, established the county’s first four-year public high school, and fined families for not sending their children to school. 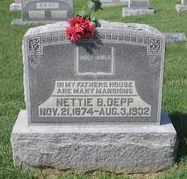 She is the great-great aunt of actor Johnny Depp.

“I hope that by having the statue of Nettie Depp prominently displayed in the Capitol, we can inspire the next generation of Kentuckians, promote gender equality, and highlight the importance of education and careers in education for the thousands of student visitors we welcome to Frankfort every year,” Lt. Gov. Coleman said.