MORE PACKAGE ITEMS FROM CHINA APPEARING AROUND EASTERN KENTUCKY, THRU NEIGHBORING STATES, AND ACROSS THE U.S.A. 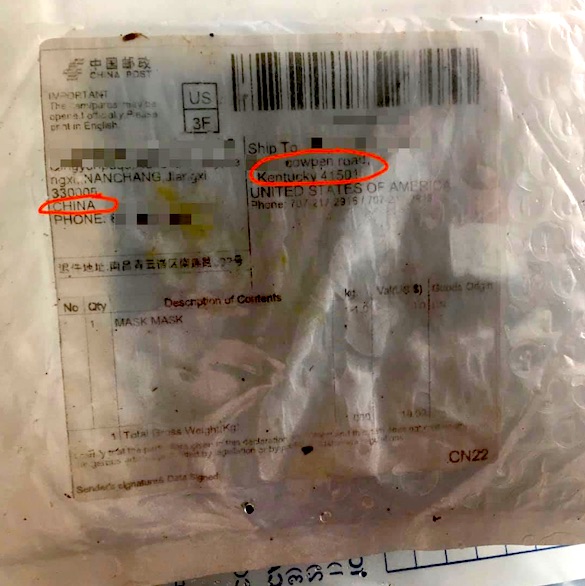 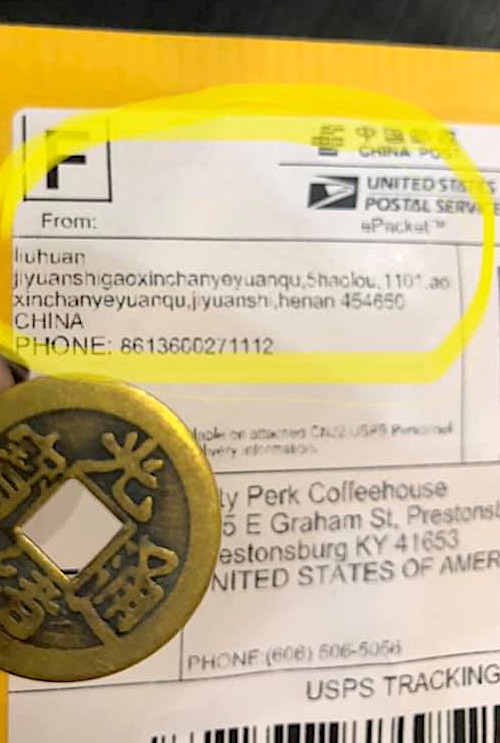 Local residents in Martin County, Kentucky, appear to be the latest targets of a scam where people receive unexpected deliveries from overseas, especially China, without explanation.

Inez resident Alisha Jude was confused when she got a package in the mail Tuesday, July 28, as she hadn’t ordered anything from China that would be containing face masks.

Martin County, Ky. Sheriff John Kirk says they’ve gotten several similar reports. Sheriff Kirk advises if you get a package in the mail from China you didn’t order, don’t open it, and don’t wear the masks.

“If you do happen to open a package and you were expecting a package, but it doesn’t contain what you ordered, I wouldn’t open it,” Sheriff Kirk said.

Sheriff Kirk says Kentucky State Police told him they’ve also been getting similar calls in other counties about people getting unexpected packages of foreign seeds in the mail.

“They’ve urged people not to plant or distribute those seeds,” Sheriff Kirk stated.

This situation is similar to a number of reports in at least ten states including Kentucky of seeds being sent unsolicited from China.

Earlier this week, television station WNWO in Toledo, Ohio reported on what sounded like the same scam happening there, known as “brushing.”

“What happens is overseas con artists send you merchandise,” according to Dick Eppstein, president of the Better Business Bureau, Northwest and West Central Ohio and Southeast Michigan,.

“Sometimes they order things from Amazon, and it just arrives. You didn’t pay for it. You didn’t order it.” said Mr. Epstein.

Dick Eppstein says this scam gives the illusion a business is credible by finding a person’s name and address online, sending the product to them, and writing a review using their name.

“They’re also boosting sales rankings, because they’re showing this high volume of product moving from point A to point B,” Whitehouse, Ohio Police Deputy Chief Allan Baer said, “and we’ve learned it’s in Arizona, it’s in Ohio, it’s really pretty much all over the country,” according deputy chief Baer

U.S. Department of Agriculture officials say you should not plant the seeds because they could be an invasive species that could be harmful to livestock and local plants. They say don’t throw them in the trash either, because then they could end up growing at a landfill.

People who’ve gotten unsolicited foreign seeds in the mail are asked to report it to their state Department of Agriculture.

If you’ve gotten one of the mystery packages, don’t throw it away. Contact your local police department so they can pass it on to the U.S. Postal Inspection Service to be tracked.

It has become obvious through this week that the mysterious package wave in Kentucky is even larger than first thought, as numerous unsolicited packages have been appearing across Eastern Kentucky during the past week, all marked with a sender’s address from China.

According to a Facebook post made by the city of Coal Run, Ky., Mayor Andrew Scott, which is in Pike County, reported that several of these packages have made their way to the citizens of Coal Run.

The mysterious packages from China have been appearing in other states, some containing seeds and others have markings and descriptions saying they contain items such as jewelry and masks.

Coal Run Mayor Scott said in a statement,”The city of Coal Run is cooperating with Kentucky Agricultural Commissioner Ryan Quarles and federal authorities to determine what threat, if any, these packages may pose to the public. In the meantime, we ask that you contact Kentucky Department of Agriculture at 502.573.0282 (email: ag.web@ky.gov), Coal Run Police Department at 606.437.0902, or your local authorities if you live elsewhere regarding any suspicious packages you receive.”

As you can see in the photo (upper right), business owner Jen Lafferty-Kopecky at City Perk Coffeehouse in Prestonsburg, Kentucky, in Floyd County said she also received a mysterious package containing a golden coin with Chinese markings on it.

No word yet from local authorities or citizens if Lawrence County has gotten any of the malicious Chinese mail packages, but we will be inquiring, as also Lawrence County residents can inform in the comment section if they have been the recipients of the strange “Chinese wave” overtures.

WHERE DOES OUR LOCAL TAX MONEY GO? THIS WEEK LAWRENCE CO. LIBRARY