Study was conducted by Jason Unrine and Wayne Sanderson, both professors in the UK College of Agriculture, Food and Environment 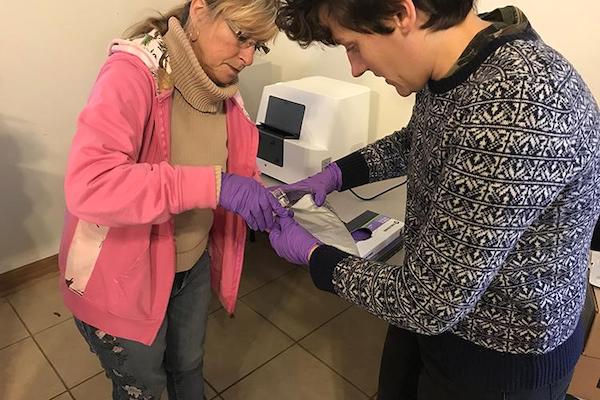 The pilot study was conducted by Jason Unrine and Wayne Sanderson, both professors in the UK College of Agriculture, Food and Environment, with funding from the UK Center for Appalachian Research in Environmental Sciences in the College of Nursing and the National Institute of Environmental Health Sciences.

The citizen stakeholder advisory board of UK-CARES connected the researchers with the group Martin County Concerned Citizens. The professors and citizen scientists from the group, including Martin County resident Nina McCoy, worked together on the pilot project, sampling drinking water and measuring it for contaminants in 97 homes in the Eastern Kentucky county. The yearlong study began in December 2018.

Nearly all Martin County survey respondents reported problems with their drinking water including odor, appearance, taste and pressure. Only 12% of respondents drink the tap water.

The UK researchers found 47% of the samples had at least one contaminant that exceeded U.S. EPA regulatory guidelines.

“We found that there were frequent exceedances of U.S. EPA maximum contaminant levels (MCLs) for disinfection byproducts in the summer and early autumn, although the EPA regulates these contaminants based on a running annual average and not in individual samples,” said Unrine, a professor in the Department of Plant and Soil Sciences. “Disinfection byproducts are associated with increased incidence of adverse health effects including bladder cancer and developmental birth defects in epidemiological studies. Some of these studies have shown associations with these health effects from disinfection byproducts at concentrations that are similar to the average concentrations we measured in Martin County. It is important to note that the cancer studies assume lifelong exposure.”

Disinfection byproducts are formed when natural organic matter interacts with chlorine during the water treatment process. Of the samples, 10% exceeded maximum contaminant levels for haloacetic acids, and 29% exceeded the maximum contaminant levels for total trihalomethanes. Both are disinfection byproducts. Concentrations of haloacetic acids were higher in homes farther from the drinking water treatment plant.

“We think the seasonal increase is due to several factors, including water temperature, the increase in algae and organic matter in the Crum Reservoir and Tug Fork River and low water levels in the river and reservoir during these months,” Unrine said. “Future efforts at reducing disinfection byproduct exposure could address seasonal changes in source water chemistry and how adjustments to the treatment process and repairs to the distribution system might be made to reduce formation of these compounds.”

WHAT-IS IN THAT WATER IN MARTIN COUNTY,KENTUCKY? NEW STUDY REPORT FROM UNIVERSITY OF KENTUCKY GIVES INSIGHT & ANSWERS THAT HAVE PLAGUE THE AREA FOR MANY YEARS
NOT AS BAD AS WE THOUGHT, BUT NOT GOOD AT ALL EITHER, SAYS MARTIN COUNTY OFFICIALS & RESIDENTS
AUGUST 4, 2020 – written by WADE QUEEN

Water problems that have plagued Martin County, Kentucky for many years, which has left local government officials stumped, and local Martin County citizens bewildered and upset for a long time, wondering what was in their water in Martin County; They are now getting some new clues, as researchers with the University of Kentucky now have some answers.

The UK scientific research group have released the results of a report study, giving Martin County residents more insight into what they’re drinking. The study began in December 2018. For one year, researchers visited 97 homes in Martin County, sampling the drinking water and measuring it for a variety of materials.

“We did not observe levels of potentially toxic metals that exceeded U.S. EPA maximum contaminant levels,” Jason Unrine, of the University of Kentucky College of Agriculture and one of the researchers in the water study, said.

However, the presence of other elements are a different story. The UK report study indicates that the Martin County drinking water regularly exceeded the Environmental Protection Agency (EPA) maximum contamination levels for cancer causing disinfection byproducts and coliform bacteria.

“It validated that our water is not good but I expected it to be worse,”  Barbi Ann Maynard, a resident of Martin County, said.

Nearly all those Martin County residents who took part in the UK study reported problems with their drinking water including odor, appearance, taste and pressure.

“Several of us in the county have been saying for years that our water was bad. We were told we didn’t know what we were talking about and that we were crazy. This kind of solidifies and validates what we have been saying the whole time,” Ms. Maynard said .

The UK study also showed some potential health risks associated with the materials found in the water.

“Those increases are the result of very long exposure times,” Jason Unrine said. “Most of the participants in the studies were using the water for more than 40 years.”

How can we improve it?

The next step is to see what improvements can be made to the Martin County water system as a result of the UK study.

“We’ll take the information and try to dissect it to see where and if there are issues, see where those issues are taking place, maybe need to focus some attention in those areas,” Jimmy Kerr, chairman of the Martin County Utilities Board, said.

“Knowledge is power. If you make decisions on misinformation your decisions are wrong. We want facts. We want to know exactly what we are looking at to work our lives around it,” Barbi Aan Maynard said.

The researchers at the University of Kentucky who conducted the study have applied for another grant to continue this water study in Martin County. They will find out later sometime in October if they get the grant.

The entire 39 page University of Kentucky research report study of the Martin County Water situation can be found here at this link below: