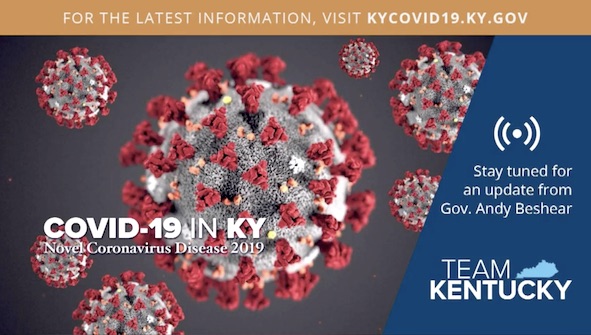 “The commonwealth is at war with the coronavirus. It’s going to take how long it takes. But we know if we don’t put our best effort forward, it will take the lives of our people, it will hurt our economy and it will impact the education that our kids get,” said Gov. Beshear. “This is probably the most significant challenge that most of us will face in our lifetimes. We’ve got to come together as a state. We all have to do what it takes.”

Case Information
As of 4 p.m. July 29, Gov. Beshear said there were at least 28,727 coronavirus cases in Kentucky, 619 of which were newly reported Wednesday. Seventeen of the newly reported cases were from children ages 5 and younger.

“It’s another day of tough news that we’re seeing across the country: whether it is Dr. Fauci warning that a number of states including us are poised for a significant outbreak, or high and even record-breaking numbers just to the south and all the way around us,” said Gov. Beshear. “That’s why we’re acting decisively. If we plateau again, it’s because of the hard work and willingness of people to wear facial coverings.”

“Let’s make sure we stop the spread because we know what follows high cases are high death counts,” said Gov. Beshear. “None of us, none of us, want to see that. Stopping this virus is what we do for those five families hurting today.”

As of Wednesday, there have been at least 609,989 coronavirus tests performed in Kentucky. The positivity rate currently stands at 5.81%. At least 7,495 Kentuckians have recovered from the virus.

For additional information, including up-to-date lists of positive cases and deaths, as well as breakdowns of coronavirus infections by county, race and ethnicity, click here.

Unemployment Insurance Update
Today, the Governor announced that in-person unemployment insurance services will begin in Louisville next week, from Monday, Aug. 3 to Friday, Aug. 7. Kentuckians must register online at kcc.ky.gov. The location and hours will be:

“We are going to have a significant number of people on hand, so get on and sign up,” said Gov. Beshear. “We want to see those who believe they need to see us in-person, in-person.”

Corrections Update
Today, J. Michael Brown, secretary of the Governor’s executive cabinet, gave an update on COVID-19 cases in Kentucky’s correctional facilities. There are currently 379 active inmate cases and 53 active staff cases; 432 inmates have recovered and 69 staffers have recovered. In total, eight inmates have died due to complications from COVID-19.

Secretary Brown added that the Governor was considering commuting the sentences of more offenders who are at least 65 years old and near the end of their sentences.

“We have released right at 1,200 inmates from our previous round of commutations and we’re currently in the process of screening another 700 inmates to see if they qualify based on those criteria,” said Secretary Brown.

The list of medically vulnerable inmates who could be considered for sentence commutation is still being compiled.

Kerner Commission 2.0
Yesterday, Gov. Beshear highlighted a new effort in Kentucky that aims to pick up the mantle of the landmark National Advisory Commission on Civil Disorders, better known as the Kerner Commission, which was established 53 years ago today by President Lyndon Johnson.

New Actions to Fight Surge in Cases
On Monday, Gov. Beshear announced new actions, conceived through and backed by guidance from the White House, to stem the growing number of coronavirus cases and rising test positivity rate in the commonwealth.

Under a new order from the Cabinet for Health and Family Services, bars are closed and restaurants are limited to 25% of pre-pandemic capacity indoors. The Governor and the Kentucky Department for Public Health will monitor case numbers over the next two weeks with the goal of reopening bars and restoring restaurant capacity after that time.

In addition, the Governor is recommending public and private schools to avoid offering in-person instruction until the third week of August.

The new actions followed previous moves by Gov. Beshear’s administration, including a travel advisory that recommends a 14-day self-quarantine for Kentuckians who travel to states and U.S. territories that are reporting a positive coronavirus testing rate equal to or greater than 15%. For an updated list of areas meeting that threshold, click here. In addition, the Cabinet for Health and Family Services issued an order pulling back the guidance on non-commercial gatherings to allow only for meet-ups of 10 or fewer people.

Testing Update
Responding to some reports that some seeking coronavirus testing still are being asked to provide a doctor’s order, administration officials reiterated that the Cabinet for Health and Family Services, Department for Public Health (DPH) issued an order removing any such requirement to receive a COVID-19 test.

Kentuckians can sign up for molecular diagnostic testing at more than 200 locations throughout the state, listed by county here.

More Information
Read about other key updates, actions and information from Gov. Beshear and his administration at governor.ky.gov, kycovid19.ky.gov and the Governor’s official social media accounts Facebook, Twitter and YouTube.