SUSPECT FOUND PASSED OUT IN ABANDONED CAR; AND NOW BESIDES A TRIPLE SET OF INDICTMENTS, WILL ALSO BE FACING LAUNDRY LIST OF ADDITIONAL CHARGES IN LAWRENCE COUNTY 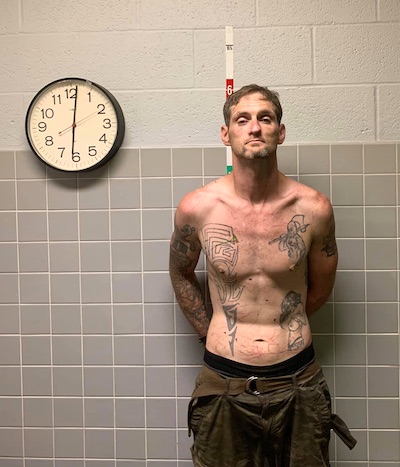 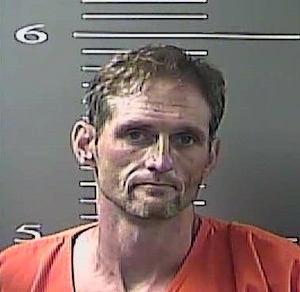 RUN, RUNNING, RUNNED, BUT NOT ANYMORE NOW: INDICTED FUGITIVE DANNY WAYNE YOUNG, FROM AND WANTED IN JOHNSON COUNTY, WHO WAS ARRESTED IN LAWRENCE COUNTY LATE SUNDAY NIGHT.
A Johnson County man who was recently indicted there on a trio of separate drug charges, led law enforcement officers in Lawrence County on a pair of wild goose chases in the Blaine area of southwestern Lawrence County Sunday afternoon, before being caught late Sunday night, due to a tip from an alert local citizen.
On early Sunday afternoon, July 26, law enforcement officers in Lawrence County sent out an alert on social media, warning residents of the Blaine area to be on the lookout for a wanted male fugitive from Johnson County.
Police identified the man as Danny Wayne Young, 33, of Hagerhill, Kentucky. According to the police alert, Danny Wayne Young was a persistent felony offender wanted on three indictments in Johnson County. Officers said in the alert Danny Young was last seen at 2:00 P.M., 26 July 2020 after leading law enforcement on both a lengthy 4 wheeler and also a foot chase in the Raccoon Branch Road and the Stone Coal Branch Road area of Brushy.
Police warned that due to the nature of his past crimes that Danny Young was to be considered dangerous, and that they should not approach, but rather call 911 to report any suspicious activity.
Just before midnight Sunday/Monday morning, Lawrence County law enforcement reported that Danny Wayne Young was captured, thanks to an alert citizen, a tip was called in to the Constable’s office concerning Danny Wayne Young’s whereabouts. Danny Young was arrested without incident when he was found passed out in an abandoned car on Brushy Creek Road. in Blaine
In addition to his three drug trafficking indictments from Johnson County, he was charged with five counts of felony wanton endangerment, one count of resisting arrest, one count of reckless driving, one count of felony fleeing and Evading (vehicle) one felony count of fleeing and evading on foot, driving on a suspended license and persistent felony offender.
Deputy Everett Chase Kirk of the Lawrence County Sheriff’s Department greatly assisted the Constables in the capture of Danny Wayne Young, with deputy Kirk listed as the arresting officer.
In all, along with the charges from his three indictments from Johnson County, and his new charges in Lawrence County; Danny Wayne Young is charged with:

JUST BEFORE THE HOT PURSUIT: WANTED JOHNSON COUNTY FUGITIVE DANNY WAYNE YOUNG, WHO FLED FROM OFFICERS IN THE BLAINE AREA SUNDAY IS SHOWN ON THE  4 WHEELER, JUST BEFORE HE FLED SUCCESSFULLY (FOR A SEVERAL HOURS) ON FOOT BEFORE FINALLY BEING CAPTURED LATE SUNDAY NIGHT.
ShareTweetShareSendPinShare
Next Post