GROWING UP IN LOUISA — Hot Bread

I was reminded the other day about how cyclical life can be if you have time to notice the many elements to consider. Take for example what I witnessed the other day while Suzie met with the lady next door at the fence line between our properties. It was early in the visitation, but Suzie had already shared a loaf of homemade sourdough bread she had just made. I wasn’t jealous, but proud because I had tasted another loaf and found it to be sufficiently worthy to seal a friendship forever. The difference is mine had hot melted butter pooling and being absorbed by the slices with runoff flowing onto the plate. 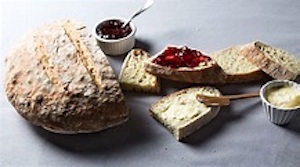 Sometimes the difference between a ‘town boy’ and a ‘county boy’ was the reservoir of experiences on often had over the other. But just as life is complicated, so too are our memories. I have been fortunate enough to have enjoyed a little slice of this and a bigger hunk of that while living through the different stages in life. Furthermore, I grew up in a time of change. That is, the one thing that brought a richness to my family and I were those lifetime changes that we would later take for granted. For example I go back far enough to remember the ice man, and the wonderful improvement brought to us in the form of a refrigerator. Wow! But even funnier is the fact that once we adopted a new way we tended to forget the old.

As a town boy I was exposed to loaf bread from the corner grocery. In the earliest days they were not sliced, but were wrapped in a cellophane wrapper and sealed to keep it fresh. I was also old enough to watch my grandmother make bread on the old kitchen cabinet that had its own flower bin. My wife has her great grandmother’s Hoosier cabinet today. It is still used mostly for the storage, but it would be easy enough to roll out some biscuit dough to enhance another big breakfast. She also made cornbread muffins or biscuits baked in a pie pan. These were great with some hot cooked apples to spread on the delightful bread.

Because I was a town boy I also remember the local brands available over my early years. The main one was Heiner’s Bread, with a bakery in Huntington, WV. I will never forget what it was like when the car or bus I was traveling in passed the bakery and the bread was rising or baking. Such an uplifting experience!

Red Skelton was famously quoted as saying on his program, “Best thing since sliced bread.” It certainly didn’t take long before sliced bread was the norm. Soon after, almost nothing was made any other way. It was Sunbeam Bread that changed their process to ‘batter whip,’ and the unsightly holes that dumped jelly on my shirt was defeated. Now, for whatever purpose I’ll never know, you could tear a slice down the middle making two matching pieces. In fairness there were other brands out there, too.

It was Hostess that brought us a bunch of other baked goods. The most famous, I suppose, was Twinkie’s. I remember the cupcakes that came in chocolate or vanilla iced treats. I remember mom and I made some homemade doughnuts, but I don’t remember any coffee or doughnut shops. Our little town didn’t have any bakers. I know that the larger cities had bakeries, but not our little town. You could buy fried pies of different kinds, but those were in small boxes selling for a dime or so. If you were lucky, someone would make some cinnamon rolls for the restaurants to sell. Baking became a craft business when some restaurants bought ‘homemade’ pies and cakes from local ladies to be sold at the counters for dessert or to go with a jug of hot coffee. I’ve read that transparent pie was a specialty at Rip’s Restaurant. Other eating establishments also items that were baked locally. This kept customers coming back. Lucky us.

My mom was a particularly good cook. I remember her cornbread, spoonbread, and a rare bread pudding. She also made wonderful rolls that were all the rage in Louisa at big church dinners. Later, people turned to ‘brown & serve’ rolls, Parker-house rolls, and much later croissants. Now our tastes run to biscotti’s and even croissants or other new products generated in our generation. 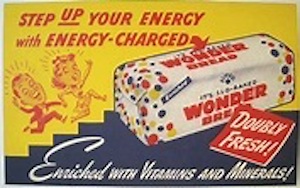 Most of the ‘store-bought’ bread was made out of white flower that had been bleached. The government got after the makers so they began to put back a little of the nutrients and started calling it ‘enriched.’ They still do that or another form of misleading advertising. The bread would have been more enriched if they had not used bleached flour and removed the nutrients in the first place. In truth, it was about ‘shelf life,’ or the ability to sell breads that wouldn’t turn green with mold before it was consume. Today, even wheat flour is augmented, or enriched with some of the stuff once removed. They also produced hot dog and hamburger buns, slicing them, too, making them easy to use. It took years for the bun count to equal the number of hot dogs in the package. Still, the store-bought buns were light, airy, and good tasting. For most people the concept of making such things seemed almost too difficult. The old ones broke apart easily, were crumbly, hard to slice, and too heavy to compliment the sandwich, but today’s buns are perfect, soft and sliced to work with today’s hot dogs and burgers.

I’ve mentioned before that when I went to camp at Cabwaylingo that the deserts were so very good. When I say that I’m referring to the rich cobblers and strudels such as blackberry and apple. I don’t remember

who the cooks were, but they may well have been the same cooks that made those wonderful hot rolls at the grade school cafeteria.

Over the years of raising a family our kids gobbled up all the aromatic breads that Suzie baked week after week. Even today if they hear that mom’s making bread they make an excuse to drop in. If they are timely they stand ready with a saucer and butter knife when finally the oven door is opened and the loaves are put on wire racks to cool; except one, of course. That one was a test that would quickly be consumed as a quality control measure. After all, we wouldn’t want to pass out faulty loaves.

Suzie reminds me of a time when I was at work and bread had just been taken out of the oven. She took a moment to grab a quick shower, but was asked by one of our sons (three of them at that time) if they could have a single slice of the hot bread. She responded that they could only have one, but she didn’t know they were playing her. You see, they each had only one slice, but the loaf had been cut into thirds!

Yes, I’ve experienced the old way and the new. Both have advantages and both had their respective place in our growing up. Making pumpkin bread with a little buttermilk mixed in, a long loaf of Italian bread or one baked in a coffee can instead of the usual bread pan were treats never forgotten. The smell of bread cooking in the oven brings back memories, for sure. Hmmm, hot bread might be just the thing I need today. How about you?