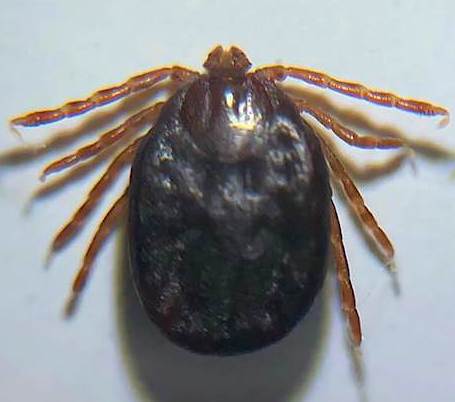 By Katie Pratt
University of Kentucky

The Asian longhorned tick, which preys on a variety of hosts including humans and wild and domestic animals, has been found in Kentucky. This new tick is known to attack animals in large numbers and will be a concern to livestock producers, wildlife enthusiasts and pet owners.

“This tick is an aggressive biter and frequently builds intense infestations on domestic hosts that can cause stress, reduced growth and severe blood loss,” said Jonathan Larson, UK extension entomologist in the College of Agriculture, Food and Environment. “One reason for their rapid buildup is that the female ticks can lay eggs without mating. It only takes a single fed female tick to create a population of ticks. Potentially, thousands can be found on an animal.”

The tick has been found in small numbers on elk in Martin County and black bear in Floyd County. It was found in large numbers on a bull in Metcalfe County in the south-central part of the state.

The Asian longhorned tick will attack wild and domestic animals and humans. (Photo by Anna Pasternak)

“The Metcalfe County ticks were submitted by a veterinarian who answered a call about a bull so infested that it was showing signs of severe fatigue,” said Anna Pasternak, UK entomology graduate student who manages the Kentucky Tick Surveillance Program. “The tick samples that the veterinarian submitted for identification to the UK Veterinary Diagnostic Laboratory contained Asian longhorned ticks.”

“With the first two findings being in Eastern Kentucky, the Metcalfe County finding is particularly troubling as it means the tick may have already spread farther across the state,” Pasternak said.

A native of Asia, the tick was first found in 2017 in the United States. In addition to Kentucky, it has been confirmed in Arkansas, Delaware, Connecticut, Maryland, New Jersey, New York, North Carolina, Pennsylvania, South Carolina, Tennessee and West Virginia. In addition to cattle, black bear and elk, it preys on deer, raccoons, opossums, cats, dogs, coyotes, foxes, sheep, goats, groundhogs, horses, Canada geese, chickens, cottontail rabbits, red-tailed hawks and skunks. As it gets further established in the state, the tick is expected to have adverse effects on the state’s deer and wildlife population.

The tick is small and reddish-brown with no distinctive markings to make it easy to identify. Making detection more difficult, unfed Asian longhorned adults are smaller than other common adult ticks found in Kentucky. It is also a known or suspected vector of several important livestock viral, bacterial and protozoan agents. Scientists are conducting tests on ticks collected in the United States, and it is likely that some ticks will contain germs that can be harmful to animals.

Individuals who find a usually large number of ticks on their pet or livestock should contact their local veterinarian. Those who find single ticks they think might be an Asian longhorned tick should work with their county extension agent for agriculture and natural resources to submit the sample to UK entomologists for positive identification.

Additional information on tick bite prevention and proper tick removal is available in UK entomology’s ENTFACT 618: Ticks and Disease in Kentucky. It is available online at entomology.ca.uky.edu or by contacting a local extension office.

Katie Pratt writes for the UK College of Agriculture, Food and Environment.