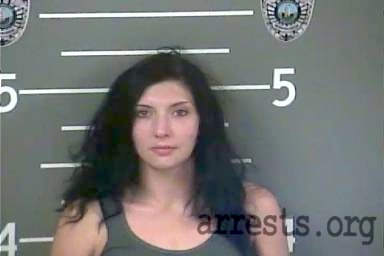 HELLRAISING WOMAN: HEATHER LADONNA RATLIFF (MOST RECENT MUGSHOT FROM MAY 2018), WHO WAS ARRESTED FOLLOWING A POLICE CHASE IN FOUR COUNTIES ACROSS TWO STATES

A Pike County woman, with a lengthy criminal past, is facing a wagonload of charges following a police chase that crossed both county and state lines.

According to police reports to the regional press, on Friday morning, July 10, Prestonsburg, Ky. 911 in Floyd county, Ky. received a call to be on the lookout for a stolen Jeep in the area. A Prestonsburg Police officer spotted the stolen vehicle and attempted to make a traffic stop.

Instead of stopping, the driver, who was later identified as Heather Ladonna Ratliff, 31, of Cowpen Road in Pikeville, took off heading south on U.S. 23 towards Pike County.

The chase continued along the busy highway into Pike County, with several different law enforcement agencies joining the pursuit. Police say when Heather Ratliff got to the Buckley’s Creek intersection with U.S. 119, she turned the stolen Jeep, heading north toward the West Virginia state line at speeds of more than 100 mph at multiple times.

The Jeep went through part of Mingo County and eventually Logan County, West Virginia before police were able to stop the car and take Ratliff into custody.

Heather Ratliff is charged with being a convicted felon in possession of a handgun, DUI, fleeing and evading police and possession of methamphetamine. Ratliff was taken to and lodged at the Southwestern Regional Jail in Holden, West Virginia, in Logan County.

Once Heather Ratliff answered to the charges in West Virginia, she was returned to Floyd County on Monday to face additional charges including speeding, reckless driving, wanton endangerment of a police officer and being a persistent felony offender.