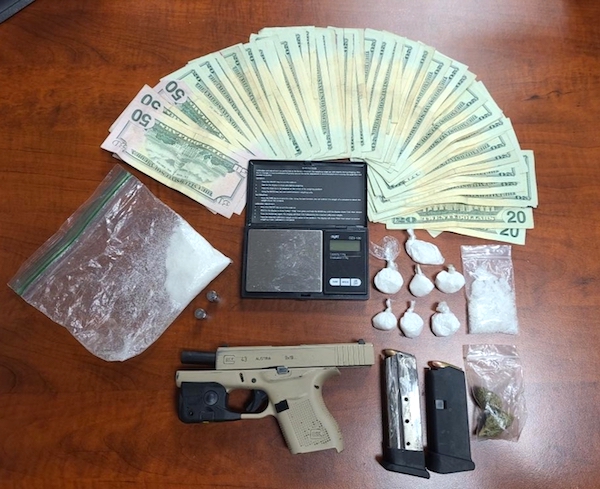 Sheriff Rick Thompson stated that the Wayne County Sheriff Drug Enforcement Unit and Road Patrol attempted to stop a drug suspect in Fort Gay and the suspect fled on a dirt bike.

Sheriff Thompson stated that after a short pursuit the suspect lost control and crashed in the Mill Creek area. The suspect then fled on foot and was quickly apprehended. While fleeing the suspect

threw a backpack that was recovered.

The backpack contained a distribution quantity of Crystal Methamphetamine, scales, US Currency, packaging materials, cutting agent, Marijuana, and a hand gun. (SHOWN ABOVE)

Randy Frisby is charged with Fleeing in a vehicle, fleeing on foot, (2) Counts of Possession with Intent to Deliver, and Pseudoephedrine Altered.

Frisby is a convicted felon and prohibited from possessing a firearm.