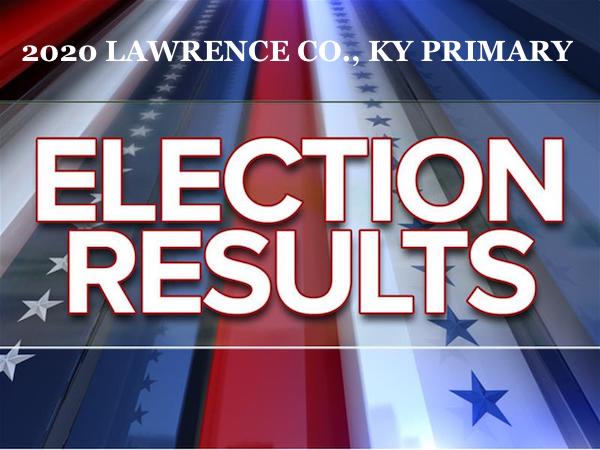 LAWRENCE COUNTY, KY. — Final results have been tabulated after a week of counting paper ballots and released today for the June 23, 2020 Primary election in Ky.

In Lawrence County newcomer Rita Yates made a strong run in the GOP State Representative’s race winning her home Lawrence County by 933 votes with 1,354 to Patrick Flannery’s 421. But it was not enough to overcome the huge lead as Flannery, a former county attorney in Carter County, got 2,097 to Yates’ 565 to win the 96th District State Rep’s Republican Primary race by 599.

Glen Martin Hammond was the winner in the Democrat Primary race for State Senator in Lawrence County but the district includes five counties. Exact figures are not yet available but he defeated Scott Sykes handily in Pike County as well. Hammond will now face incumbent Republican Phillip Wheeler this Fall.

Lawrence County will become the home of a winery as voters in the Fallsburg precinct passed the question 324 ‘yes’ and 124 ‘no’.

Lawrence Co. Clerk Chris Jobe said today (Tuesday, June 30) that just over 3,000 local citizens showed up or sent in their votes which comes to less than 30% of those eligible.

In the only statewide race with much attention Amy McGraff is claiming a slim victory in the Democrat U.S. Senator’s race. She will now face the perennial powerhouse Mitch McConnell in November.

LAWRENCE CO., KY. — Vote totals are not in yet including all mail- in absentees but Clerk Chris Jobe released the machine totals for election day and Jobe says it was “pretty good turnout considering the situation”.  He did not have a complete total of paper ballots and 160 in-house ballots are not counted.  He said the office staff had to all help hand count the absentee mail-in ballots on election day, and over 1,400 of them are not included in the totals below.

Below are the results in Lawrence County SO FAR. All official votes will be counted and reported next Tuesday, June 30, Jobe said. 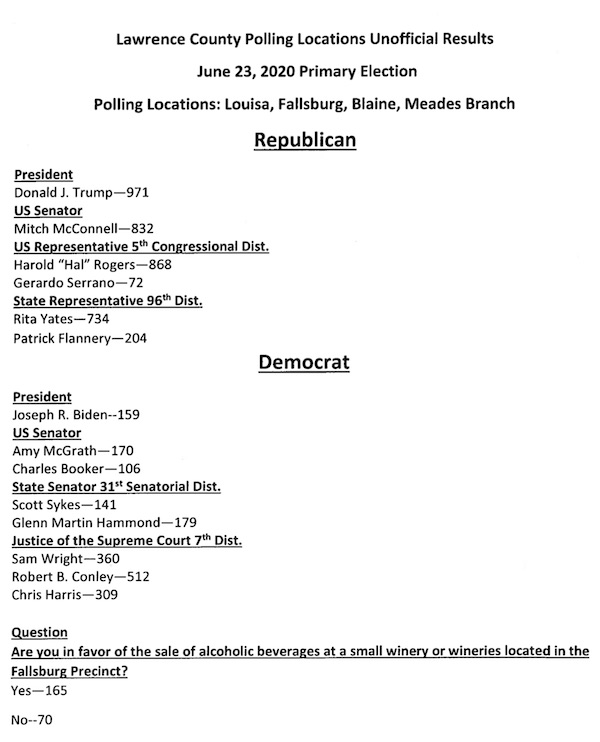