GROWING UP IN LOUISA: Sweet Living!

Life can be sweet, don’t you agree?

Like many readers who grew up in the era when life was sometimes more than just meat and vegetables. There were special times for little kids who craved the sugary concoctions produced on occasions of holidays, the arrival of company, or just because. I remember those times at home, in grade school or when I was with mom on grocery-shopping days. It was a time before super markets when the little corner grocery was king and almost all confectionaries were ‘homemade.’  This week I decided to come up with a short-list of those wonderful treats in hopes that you, the reader, may also have similar memories. I’m salivating already as visions of mom’s creations dance and stir up those early days.

Sweets from the store.

The small grocery stores nearly always had a candy counter near the front entrance that had shelves and containers full of penny candy that never failed to attract children. I remember little wax barrels that had a root-beer syrup that was so good, but so quickly gone. They had play cigarettes, wax cokes, big ugly waxed lips, gumdrops sprinkled with sugar, and a number of five-cent candy bars such as Hersey’s, Clark Bar, Zag-nut, and Moon-Pies, as well as some frozen bars made with ice cream. While these were good they were more of a distraction while our moms did the serious shopping in the meat counter.

I remember when mom had me come into the kitchen while she was making something she said was really special. On the stove top she had a pot filled with melting lard or grease, and on the enameled pullout shelf that 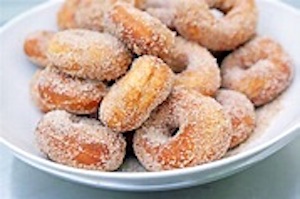 was part of the kitchen cabinet, a pile of dough. She was folding and kneading the dough and sprinkling flour on her hands and on the dough. Finally, after having me help with the kneading, she took a rolling pin and floured it. She rolled the dough out flat but still not as thin as biscuits, and then gave me a tin cutter that was shaped like a circle within a circle. With this, I cut out a doughnut. Mom put the newly formed doughnut and the doughnut hole in the hot grease. We watched the doughnut swell and after a minute or so she flipped the doughnut over so the other side would be in the hot grease and also cook. After they had browned she lifted each doughnut and doughnut hole out and laid them on a wire rack. She sprinkled them with sugar. I got to eat one of the middles (holes) while it was still hot. Yum!

She would do this several times over the years, always having me lend a hand. Some had confectionary sugar on them, but she also used chocolate and a sugar glaze at other times. No matter how many were made, there was never enough. They were gone in no time.

Doughnuts that are made by bakeries, or franchises are good, and in many cases much fancier than mom’s, but they still don’t compare with the taste or the time spent together making them. The plain ones at the store are closest but they have a bitter taste compared to the ones mom and I made.

She sometimes made something very like doughnuts that are made by others today. I’m talking about apple fritters. These are wonderful delights unless like me you are trying to lose weight. I’ll likely pick up a pound or two just writing this to share. 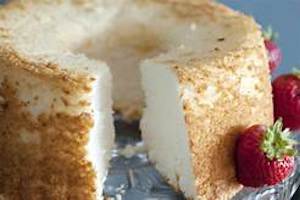 I never had a birthday party growing up. It was something that happened for other kids, but it wasn’t an automatic thing in those days. Still, when my birthday came around someone would always make a cake, add the candles and allow me to blow them out after making a wish. We’d sing Happy Birthday and have some cake.

I cannot help but remember when my grandmother from Salt Lick, KY visited and carried an angel food cake. She made a big fuss as she arrived and told me she’d baked a cake just for me. I took it into the kitchen while the grownups talked. By the time they decided it was time to cut the cake they found it had been totally eaten. I had taken her comments literally and never once gave thought that others may have enjoyed the cake, too. Wow! I burst into tears and ran to my room. I was so embarrassed. Although I may have wanted to ‘eat the whole thing,’ I had learned my lesson not to deprive others of their fair share. I learned the hard way to think of others.

Two kinds of pies come to mind when I remember growing up. A rare favorite was ‘fried apple pies,’ which were just the right size for one person. Man I loved those. My wife still makes them but it is so rare since she is 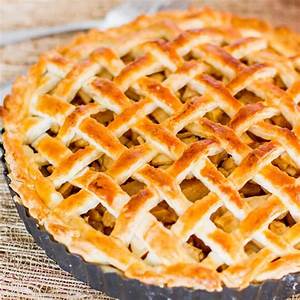 watching my weight. I’ve seen them sold in stores and gas stations that were filled with apple, peach, or cherry, but they miss the mark when compared to a hot pie just taken from the griddle. It’s not that I wouldn’t buy them, because frankly I have, but it’s not the same as homemade.

The traditional apple pie is a favorite that I remember eating at church dinners. We fixed some at home, but it was at these dinners where I could sometimes sneak an extra piece. That same format was used for cherry pies and others such as custard pies or chocolate. Sometimes, just because there were several kinds made up I could get a slice of each! Wow! Talk about luck. 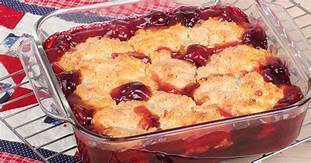 We had apple cobblers, too, as well as cherry, but my favorite made at home was blackberry. Put a glob of that in a bowl and top it with milk or ice cream and that’s heaven, sure enough. I remember in season eating some strawberry pies or cobblers, too. I have to be careful here because just writing about these can cause me to gain weight. What a way to go, though!

I remember full-well the ladies who made big trays of various cobblers to service at the camps I attended at Cabwaylingo. Supper was good but nothing compared to those wonderful sweets made especially for us kids. Yum!

Sometimes, mom would break out the waffle iron and make a stack of waffles. A little maple syrup and dollop of butter and this skinny kid would be delighted. It didn’t happen often so when it did it was a real treat. 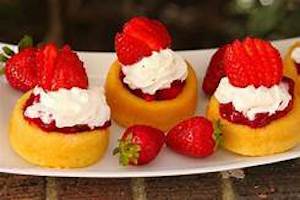 It was in the spring when we had another kind of treat. Strawberries and those wonderful juices poured over some shortcakes and topped with some whipped cream was heavenly. I always wanted to know why this delight was limited to early spring. I can taste it now.

Contrary to strawberries, the canes harvested and ground for sorghum happened in the fall. Hot sorghum on some flaky biscuits mixed with fresh churned butter was less sweet but still hit the spot. More of a country tradition, sorghum was canned/bottled and sold. This yummy practice reminds me still of home and the traditions I 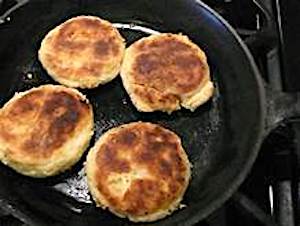 Another fall treat was pumpkin pies, sweet potato pie, and pecan pies. These were whipped up as part of the Thanksgiving gateway that led to the Christmas holidays. Whipped cream on top made it a treat worth remembering.

Not hungry yet? Well, go through the list again a little slower and remember all those tastes and flavors.

Many of America’s faithful say it is time to return to church, but some governors continue to disagree