COUNCIL VOTES TO HAVE JULY 4TH PARADE, FIREWORKS THIS YEAR!

SEWER LINES OVERHAUL IS THE FIRST STEP IN LONG JOURNEY PROCESS TO EVENTUAL BUILDING OF NEW SEWER PLANT BY MIDDLE OF THE DECADE; COMES AS CONSTRUCTION FOR NEW PICK UP LANE IS SET TO BEGIN AT LOUISA EAST AFTER REDESIGN PLAN LEADS TO EASIER, QUICKER AND LESS EXPENSIVE PLAN

The Louisa City Council held its first in person meeting on Tuesday evening, June 9, 2020, at Louisa City Hall since February, due to the COVID-19 pandemic, however the meeting was held under continuing social distancing standards, including temperature checks on everyone who came into the meeting..

The council meeting lasted for just under an hour, with nearly all of the council business done in 35 minutes, but a lengthy executive session dragged on for over twenty minutes.

The meeting started several minutes after 7:00 P.M., when Mayor Harold Slone arrived late for the first time, he said, due to getting behind someone in traffic, as he put it “did not have a gas pedal in their vehicle.”

Also, two city council members did not attend the meeting, Matt Brown, and Mitch Castle, which made it easier on the crowding space in city hall due to the social distancing standards.

After the call to order opening and both the pledge of allegiance and prayer, the first orders of business were comments by Mayor Harold Slone, who stated that the long awaited sewer line overhaul construction project had begun this week in the northern part of Louisa, on the entire length of Lock Avenue and Pike Street areas. The mayor said underground sewer, phone and all other underground lines had been marked off on Lock Avenue and Pike Street.

The mayor said someone hired by the contractors doing the sewer project had filmed all the areas along Lock Avenue and Pike Street, from the houses to the street ways, so that after finishing on any specific residential spot, and the home owner says their property was now different than it was before, the city could see and show that party if they were right, or likely wrong.

Mayor Slone said that the planning process had been ongoing for the past 3 years or so, and that it was the first step in a long process that has to be done first according to officials in Frankfort, to begin the final goal of building a new sewer plant for Louisa.

Mayor Slone also said that while the sewer line project would be done along all of both designated streets, the contractors would work only one block at a time to lessen the traffic flow disruption. The mayor stated that the project was starting in front of the Louisa Fire Station, and around Gioavannis and the Louisa Drug Store.

Louisa Police Chief Greg Fuggit asked if there were going to be any traffic flow disruptions at the starting construction site area, to which the mayor said ‘yes’. Chief Fuggit asked if the council could vote to make the one way end of North Main Cross Street temporarily two ways to alleviate the traffic congestion from the construction beginning area.

In the second part of his comments, Mayor Slone said a large number of people have been asking if there were going to be having Fourth of July fireworks this year, The Mayor said he was committed to have the firework show, however, he stressed that there is usually a committee that handles the Fourth of July music and parade.

Mayor Slone said that every festival in eastern Kentucky had been canceled for the rest of the year, and the Fourth of July committee asked the mayor if the city would not only still do the fireworks. The mayor said he had not asked Louisa Fire Chief Eddie Preston if they would still want to be part of the parade, cause as Mayor Slone put it; ” It is not much of a city parade if the city’s fire trucks are not part of the parade.”

Mayor Slone also further pointed out that with the cancellation of this year’s Septemberfest, which is not planned or funded by the city, but by a board committee, just like the Fourth of July Committee, decided to call off this year. The Septemberfest committee told him that the main reason for the cancellation this year was that they were uncomfortable asking for money from local businesses like they do every year, due to all the economic turmoil for local businesses as part of the 2020 pandemic related economic meltdown.

Mayor Slone said that in all of the past Septemberfest festivals, the city has never funded or planned them. The mayor said the only thing the city does for festivals is provide the streets for the festivities, and clean up all the garbage after the Septemberfest is over.

Mayor Slone finally summed up the situation, as he stated that the city could not do the Septemberfest on its own in the amount of time available, as the city would have to raise at least $26,000 between now and the dates that the Septemberfest was to take place. 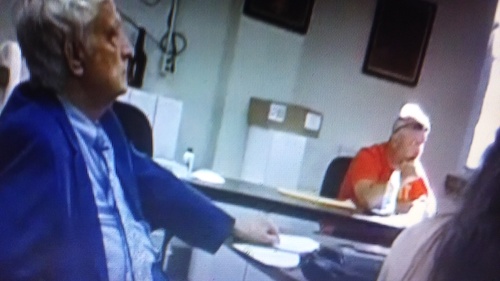 * On items 3, 4, 5, and 6 of the city council meeting agenda, the city council passed unanimously on each of the votes regarding approving the minutes for the May 12, 2020 city council meeting; approving the second reading of Ordinance 2020-01, “An Ordinance Establishing the Annual Budget for The Fiscal Year (July 1, 2020 through June 30, 2021) for City of Louisa, Kentucky”, which the budget set even at $2.2. million, with city having a small surplus available for the new city budget; approving the second of Ordinance 2020-02, “An Ordinance Establishing the Budget for The Louisa Utilities Board for July 1, 2020 through June 30, 2021”;  and approving the second reading of Ordinance 2020-03, “Compensation of City Employees Pursuant to KRS 83A.070.”, which is the yearly inflation pay raise mandated by the state for city employees across the state (as well as county employees across the state, too).

* In new business on the city council agenda for the meeting, on agenda 7, after reviewing photo copies, the city council tentatively unanimously approved for allowing Foothills Comm.  to place a pole on the property of Louisa Fire Station #2 near the high school.

* On agenda eight, that was a mistake said Mayor Slone, as they had authorized already on posting advertisements for bidding on blacktop in the city at last month’s council meeting

* On agenda nine, Mayor Slone stated that the project to make the new Louisa East school pick up lane was ready to begin, to alleviate the major traffic congestion problems, a planning process three years in the making. The mayor said that he hired engineers for the design of the project, and when on the last of the planning, just as construction was set to begin several weeks ago. one of the engineers stated that the project could not go forward as the plan to build the new lane down and back up the river bank was in a ‘flood water channel’ (basically a floodplain), something Mayor Harold Slone said he had not had mentioned to him by anyone in the last three years of planning.

So a new design was made by the engineers, that ended up becoming an easier construction plan than the original design had been.The new design has the pick up lane coming around the back of the school and along next to the school bus student pick up lot, along the picnic benches areas on the top of the of the riverbank area; and that the new pick up lane will be separated by a concrete barrier in that area.

Mayor Slone said that the state has promised to pay $75,000 for the new pick up lane for the project, and that mayor Slone said that the new easier design will not only most likely be completed within that budget amount, which will mean the city will not have to pay for any amount beyond the $75,000 like the city would have had to do with the original design plan, but that the easier construction design plan for the pick up lane will have the project finished by the start of the new school year that begins August 6 this year.

* Finally after Mayor Slone asked if there were any council comments and also any comments from the audience, during which Louisa Police Chief Greg Fuggit announced the winning bids on surplus office equipment from the city police department, and that there were still bids open for another month on 4 vehicles. You can look at them on the Louisa City Police Facebook page, and it will show the site to go to register to make any bids on the four vehicles. The council then went into executive session, and this time stayed in the city hall, with everyone else stepping out; instead of going into the mayor’s office for the closed door session.

Mayor Slone asked the council for the motion to adjourn the meeting, and when it was given by two members, the mayor ended the meeting at exactly 8:00 P.M

Leave a Reply to Will Silly Cancel reply