LOUISA, KY. — With perhaps the most confusing election held in Lawrence Co. in modern times coming up June 23, 2020. The Primary election was scheduled by statute on May 19, 2020 but because of the COVID-19 scare was moved to June 23.

The deadline for registering for non partisan elections like city council and board of education in November passed on June 2 before many people realized it had been moved back from its normal August deadline.

Of most interest in the Primary is the 96th State Representative GOP Primary between Rita Yates, of Lawrence County and Patrick Flannery of Carter County. Incumbent Kathy Hinkle has no opposition on the Democrat side.

Also of interest is the vote in the Fallsburg precinct on whether to allow the sale of homemade wine in the precinct.

Another race to keep an eye on is the state senator contest on the Democrat side as Scott Sykes is up against Glenn Martin Hammond for the right to challenge incumbent Phillip Wheeler.

Four voting places will be provided according to Clerk Chris Jobe. He said most people are voting with the paper ballots available at the clerk’s office or through the mail.

“I wondered how this would go over in Lawrence County but we’ve had over 1,000 already sent in,” Jobe said. You can get your paper ballot by calling Jobe at 638-4108. 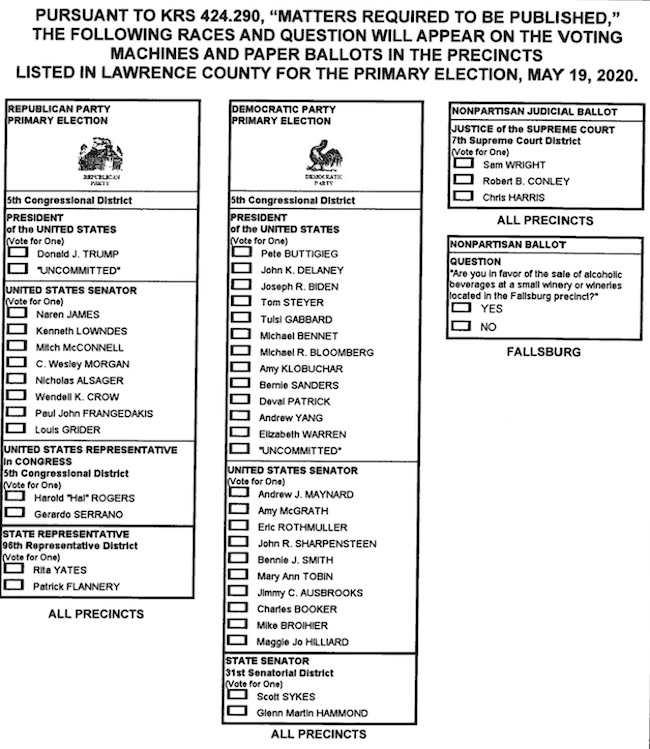