GROWING UP IN LOUISA: Memorial Day

This year takes the cake, my friends. When I was growing up, holidays were great time to celebrate, take time off from work, and have family gatherings. This year we are struggling as if we are mid-course in a physical therapy class recovering from surgery. It is as if we were smacked down to our knees and we have been jailed without the support of friends and family. This Coronavirus has taken its toll. We’ve stocked up on some melons and ice cream and picked up some buns to hold the hot dogs, but then with self-isolation it’s not family time. Isolated as we are, only two of us will be here to eat.

We might set on our decks and enjoy the view, but even a rare trip out to the cemetery requires caution, lest we run into another living soul. The elderly run a higher risk for getting infections that could take us another step toward passing. We now are left to use mail, email, texts, telephone, or use some other electronic means to keep in touch. Still, that’s better than the days before having those resources that I wrote about a few weeks back. A good side, working from home is pushing me to discover new ways to work alone, do away with paper files, and have virtual meetings. While good, it isn’t the same. If you are a hugger this isolation is lonely 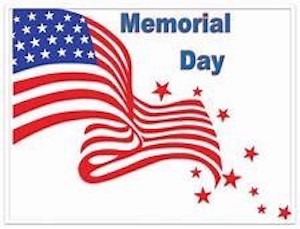 Memorial Day is upon us. Just as some of the fetters are being loosened as we move back toward normalcy, fear is real and remains for many of us. I’ve remember stories about the 1918 flu epidemic, but time this world-wide infection seems to be especially vicious to the young and old. In addition, it is spreading faster. That makes sense in that travel is faster and easier, so we have the ability to tour the globe and carry the virus to all we meet. That was a little less of an issue back then, but the results were still devastating. Even back then families were quarantined and isolated. It may not be new to be locked away, but it still hurts.

Looking at this holiday, I remember that my Granny called Memorial Day, ‘Decoration Day.’ It took some questioning on my part back then to understand what the celebration was about. I had no trouble understanding it was a holiday and there would be sweets, company, and cousins running about. Up until then the word decoration was about mom decorating a cake. Somehow, this holiday was less festive and more serious.

I had little choice except to ask granny what this holiday was about. I remember the look on her face when she stopped and took a deep breath. Her eyes began to water with soft tears as she laid her hands on my shoulders and explained, “People set aside this day to decorate the graves of those fallen in wars.” She told me we as a family would be going to the graveyard later that morning. She said that while we were at the cemetery we would also put flowers on Doc Wray’s grave. In fact, we would also visit the graves of family and friends, honoring their memories. “It is a time of solemn remembrances of people that have gone on to their reward before us,” granny said. Frankly, it was still a little mysterious to me, but I vowed to not be disruptive dishonoring our forefathers.

Because I was a ‘young’un,’ only about to start grade school, it was to be my first time on Pine Hill. That steep road up the front of the hill afforded me many chances to look down on our little town, but it was a sight that brought fear to me. If the driver of the car taking me and my family up that narrow, winding road made one little mistake it would make us permanent members of the Pine Hill Society. I preferred to remain above ground for the time being, thank you, so I mostly focused on the floorboard as the car lumbered up the hill. It was a relief when we ‘topped out.’ When the grownups opened the car door there before me was the broad, large cemetery used by many of the families about town. Monuments and tombstones were nearly everywhere in sight and some graves had already been decorated with flowers or miniature American flags.

I learned that old doc Wray, granny’s deceased husband, was buried near the back of the cemetery near the road that can take you to the new United Methodist Church. That shiny new building sits on the ridge that connects Pine Hill and Town Hill. I can’t say that this road existed back in the day, but this route to Pine Hill is preferable to me now over that steep climb in the front that was used for so many years.

Once we got out of the car the adults went to see several graves, including grandpa Wray’s. I had not met the man, and had no picture of him in my mind. At first, I hung back. I wasn’t sure I wanted to be that close to dead people. I had nightmarish thoughts of an arm reaching out from the grave and grabbing my ankle. I shuttered that I might be dragged into the earth never to be seen again. Poor mom would be so upset if her baby boy was taken from her so soon.

As the adults who were speaking softly continued to linger, I thought it might be a grand place to explore. Like any little boy I roamed nearby graves and as far as I could reading the names, dates of births/deaths of the people lying below my feet. “Don’t step on any graves!” my grandmother shouted to me. I wanted to know more so I ran to her as she explained, “It is disrespectful, to step on a grave. Stand off to one side, but never cross over.” Satisfied, I ventured back to carefully looking around.

I could see other families off in the distance that were bent over and putting flowers next to the headstones. It was then that I noticed that some of the graves seemed to have sunken while others seemed to have mounds. Some were fresh and others seemed to be very old. I ran back to find my family. When I asked, granny carefully explained that in the olden days they didn’t use concrete vaults like they do now. That meant that without the support, the coffin would eventually rot and settle under the pressure of the dirt above and sink.

After being allowed to roam freely I was now equipped with new knowledge of acceptable graveyard behavior. As is normal with youth, I finally tired and wondered if we would ever be ready to leave. It was time to start pulling on the skirts and crying in hopes of encouraging our departure. I really didn’t want to spend the whole day on Pine Hill. 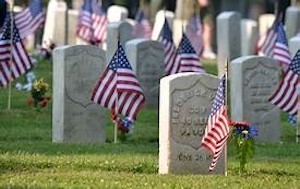 On the trip back down the hill, granny also told me about the brave soldiers that had died in defense of our country. It was they who fought to protect us and make us free. Granny told me that for the first half of the day the nation’s flag should be flown at half-mast. Then at noon it would be raised back to full staff. The veterans were to have ceremonies early in the day and again at noon. Some would wear their uniforms and ‘taps’ would be played.

These were times when we were barely out of World War Two, but a ‘police action’ was underway in far-away, Korea. Many of the men of our community had served our country during WWII. I later met some older men had served in the First World War. One old codger had served in the Spanish American War, that I would learn more about later.

As a ‘war’ baby, I was used to seeing the color ‘olive drab’ on jeeps, trucks, and even trains. I had seen souvenirs that some brought back from war. Later, in grade school, our teachers taught us history lessons about the American Revolution and the other wars that followed for our young nation.

I remember that during these days the Garden Theater showed war movies. They also never failed to have newsreels that depicted the latest news relating to the theaters of war. Many of these short-subjects were filmed by the War Department, later called the Department of Defense. I learned how men risked and sometimes gave their lives to protect others. I learned about soldiers, sailors, and marines and their devotion to the country.  With this upbringing, I had no hesitation to join up when it was my time. I was proud to serve. I still rise at the playing of the National Anthem, or the passing of Old Glory. I cannot hold back the tears that leak out when I hear the Star-Spangled Banner. My chest swells with pride. I have tried to teach this to my children, too.

Today, the old ‘Decoration Day’ has become ‘Memorial Day,’ which has become for many the kickoff of summer. Theme parks typically open to summer hours, the pool covers are removed, and shorts are worn in the warming sunshine. Instead of visiting Pine Hill and other cemeteries about, we see folks taking vacations or making trips to see friends. We attend or participate in ballgames, tournaments, fishing, boating, swimming, and other kinds of play because this is, after all, summer’s first holiday. Those of us who live on the coast are reminded that hurricane season is also around the corner.

A few will still remember those on Pine Hill and other cemeteries scattered about our country, but most do not. With luck, an American Legion honor guard will be at the stadium. For a moment those in the crowd will 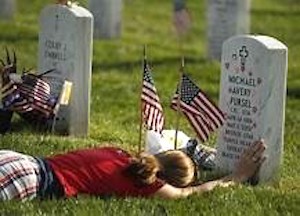 remember. A wreath will be placed in Arlington and the guards will continue to honor our fallen military men and women. Other national cemeteries will be decorated with miniature flags. Those who recently lost a brother, sister, spouse, or parent will remember, but we all owe a debt. While we’re at it, we could show some support to the hurting families who suffered after a loved one paid the price.

Decoration Day is a time when we should remember all those who died before us and especially those who are yet dying for this nation. Let us take a moment and give thanks for the sacrifices not only for those who died, but those who survived and came home. We can honor our servicemen and women as well as our ‘first responders’ who lay it on the line for us every day. We might even remember the one who died for us on a cross, as well.