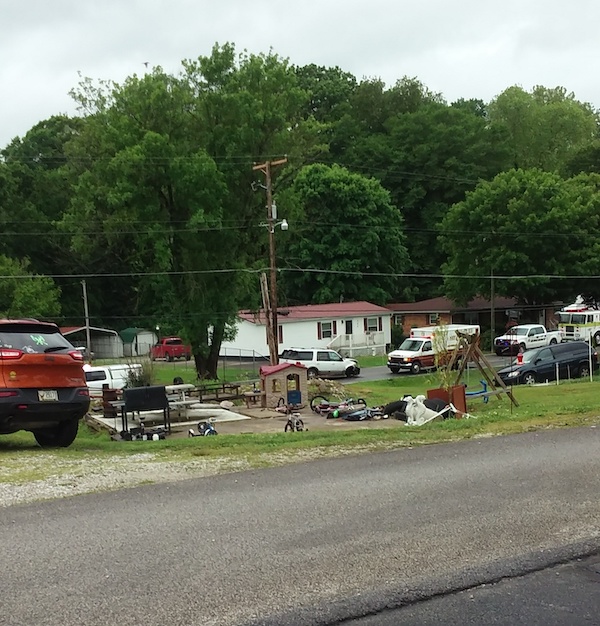 TRUCK GETS FLIPPED ON ITS TOP TO SIDE OF THE ROAD, WHILE A JEEP AND A SUV EACH GET A WHEEL RIPPED OFF THEIR AXLES 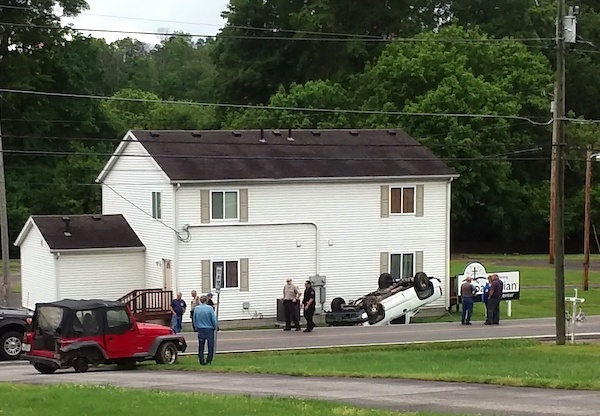 ROUGH 3 VEHICLE ACCIDENT ON THE POINT SECTION LATE THURSDAY AFTERNOON, MAY 21. NO INJURIES WERE REPORTED FROM THIS ACCIDENT ACCORDING TO THE LAWRENCE COUNTY SHERIFF DEPARTMENT.

The accident happened around 4:40 P.M. at 524 Route 3 South, in around the Big Blue Drive and Sackie Lane areas, in the vicinity of the Louisa Church of God.

The three vehicles involved, a red jeep, white SUV, and a white pickup truck, (shown above) all suffered severe damages, with the red jeep having its rear right wheel torn off the axle and the white SUV having its front right wheel torn off as well with major damage to the front body, while the white pickup had flipped over on its cab top, coming within inches of crashing through the two story Father Beiting Appalachian Mission Center, Point of Hope.

There were no injuries, luckily, among all those involved during this significant accident, according to Lawrence County Sheriff Chuck Jackson. Names of those involved were not given.

The causes of the accident remains under investigation by the Lawrence County Sheriff Department.