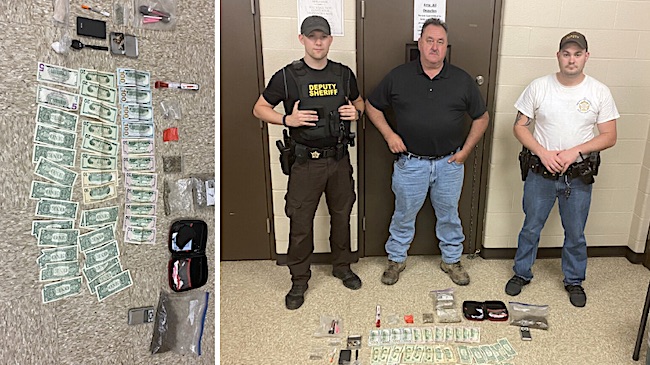 SUSPECT, WHO HAS SIGNIFICANT CRIMINAL RECORD, WAS WANTED FOR BEATING AND/OR STABBING UNNAMED INDIVIDUAL

What started out as an arrest warrant being served for a felony assault turned into something way more than expected when MARTIN CO. law enforcement officers happened upon a hard core street drug dealing operation instead.

According to a press release report by the Martin County Sheriff’s Department, on late Friday night, May 15th, Sheriff John H. Kirk and Martin County deputy William Tyler Lafferty, were sent to a residence on 62 Shadle Fletcher Lane in Inez to serve an arrest warrant on a man who had just got charged for a serious felony assault.

Upon their arrival, the man they were looking for made eye contact with Sheriff Kirk before standing up and attempting to hide a large clear bag with what the deputies believed to be narcotics inside.

The male suspect was ordered to show his hands before being detained.

Afterwards with suspect in custody, Sheriff Kirk left to obtain a search warrant, and once obtained and executed they were able to locate a number of bags containing meth, heroin, cocaine, and marijuana.

In the drug roundup amount total, around two grams of meth, less than four grams of cocaine, less than eight ounces of marijuana, and an unspecified amount of heroin was recovered.
Also recovered at the residence were a tin can with already smoked rolled joints inside, a black digital set of scales, two syringes (one empty and one loaded and uncapped), a set of tan and silver digital scales, and $981 in cash.

The newly discovered drug dealer, 43-year-old Charles Fletcher was arrested besides the original warrant charge for:

* ASSAULT, 2ND DEGREE; but he is now facing 10 drug offense charges, seven felonies and three misdemeanors; which are listed as the following:

Charles S. Fletcher has a somewhat extensive criminal history, with just over two dozen arrests on numerous citations, bench warrants, felonies, and misdemeanor infractions in the last 16 years, most of them in Martin County

Charles S. Fletcher was transported to and is currently being held in the Big Sandy Regional Detention Center.

LAWRENCE CO. COURTHOUSE WILL RE-OPEN MONDAY MAY 18, EXCEPT CLERK