GROWING UP IN LOUISA: Carnivals and Fairs

I remember a wonderful thing that happened in the summers when I was growing up. This was a time when traveling carnivals visited and offered thrills on rides, concessions, and shows. I thought at the time it was merely about rides but in time I saw the side-shows and various games and concessions as exciting, as well. It was years later that I saw some of the minor fleecing that lined the pockets of the carnival workers, or roust-bouts. These attractions became distractions from the everyday, often staying about a week before they packed it up and moved on to the next town. 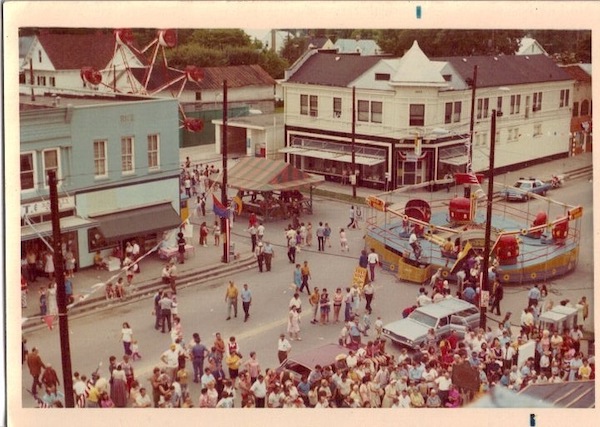 I remember them setting up in our town on the bottom land below Pannell’s garage and the Southside Skating Rink. They also set up at the intersection of Main and Main Cross streets, and again at the fairgrounds in High Bottom. I remember them putting up posters announcing weeks ahead when they would be there.

In the early years, I was attracted to the merry go rounds. Mom would ride with me to ensure I would not fall and get hurt. The carousels had great, beautiful, carved wooden horses that rode to the sounds of the music up and down on shiny steel poles. I remember the flat iron stirrups and the leather reins, but more than that, it was the carousel music that magically droned from the fancy, mirrored center. A calliope drowned out the noise of the crowds and allowed the rider to escape into his or her imagination, perhaps chasing the bad guys like we’d seen at the matinee. 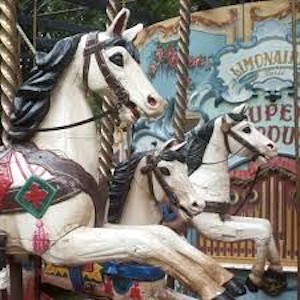 I remember studying the wooden floors and finding there were pie-shaped sections that undoubtedly folded for easy packing and travel. In those days, if the ride had a ring to grab, I didn’t know it. I would find out about those many years later by watching movies. I recall that some of the carved animals were not horses, but hippos, lions, giraffes, or other creatures from the ‘dark continent.’ There were benches on some of them, apparently to allow older folk to ride as if on a train, perhaps to steady them should the ride be too swift. Parents would often stand beside the horse holding their sweet little muffins, lest they fall and be hurt.

Another ride I remember was the metal cars that were positioned on the end of one of several arms, so they rode in a circle, one behind the other. The good ones had steering wheels and horns that worked. For those a little braver, small metal airplanes flew just off the ground and during the ride rose to a dizzying ten or twelve feet. Older kids got into flying swings that were like the swings at grade school, but these were motorized and attached to a spinning axel. As the speed picked up the swings swung out from the middle and went higher and higher. 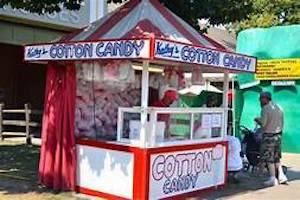 I was a pretty good-sized fellow when I finally got on the dreaded octopus ride. The first time I did I became very sick at my stomach. I soon got my ‘sea legs’ and enjoyed the ride so much I’d ride them several times in an evening.

Another ride was some spinning shells that had a bench seat and a steel arm to hold you in. Those traveled up and down while spinning one direction and then the other. Riders were thrown against each other and had to hang on for dear life. When I was older, I loved that ride because it got my date really close. Likely as not, really bruised, too.

The Ferris wheel was a thing I had to grow to like. I never cared for heights and this ride took you to the top of the world. Usually, it found a reason to stop and keep me up there, with nothing but air between me and the hard ground way below. 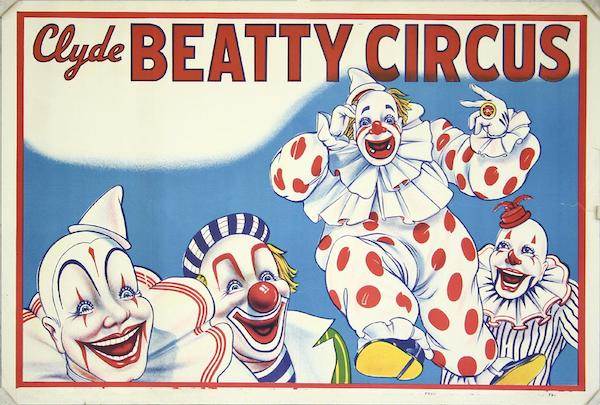 Carnivals never had a real roller-coaster, like the wooden ride at Camden Park. I rode that one a lot when I got the chance. It helped me get past my worry over heights.

As I got older, there were the spook-houses, the house of mirrors, side shows with sword swallowers, tattooed ladies, snake handlers, and countless others. There was also the penny pitch, the baseball thrown, the shooting gallery, the fishing hole, the duck pull, and dart throw (balloons), weight guessers, bell ringer (mallet), and all the loud barkers, selling whatever they had.

I remember the noises, the smell of cotton candy, and caramel dipped apples, sausages, and French Fried potatoes and onion rings. This was a time when a kid with pocket change could find the attraction that was just right, for him or her. All the lights, the smoke, the yelling, and the music was something to behold, and remember. For those nights it was magic. I find that, today, I can virtually revisit those carnivals again. I only have to sit back, close my eyes, and enjoy the memories of the past. Take a deep breath, my friends, and join me.