Restrictions in travel, small gatherings to be lifted in time for Memorial Day

Beshear announces restrictions in travel, small gatherings to be lifted in time for Memorial Day 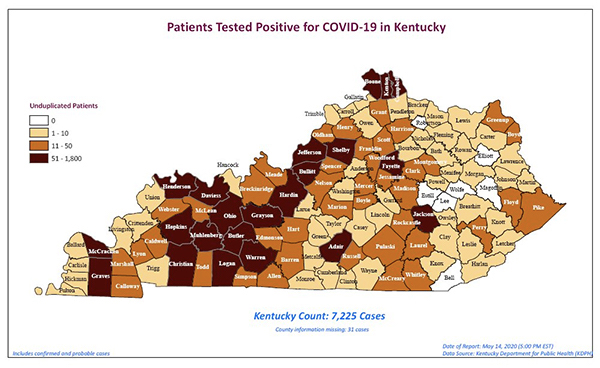 Gov. Andy Beshear announced during his daily press briefing Thursday that restrictions on travel and group gatherings of 10 or less are being lifted just in time for Memorial Day weekend.

The new date is Friday, May 22, the governor said. “We originally had it on May 25 but realized that people are making plans for Memorial Day. I trust we can do this right, that we can do this safely, and I’d much rather get out there with some good guidance and rules as a number of people are going to do this anyway and encourage you to do it well.”

While guidance on group outings appears on the Healthy at Work section of the state’s website, kycovid19.ky.gov, Beshear mentioned a couple of points. “Hold the gathering outside whenever possible. If you’re thinking about a picnic, spread those blankets out so they are six feet apart, since you can still see each other and still talk. Remain six feet apart from those who are not in your household.”

He also added a few other tips: “Do not share food, drink, containers, plates, napkins, or utensils. Don’t do a buffet, and I wouldn’t do a potluck.”

Beshear announced 199 new cases of the coronavirus on Thursday, making the total 7,225. The number of deaths dropped to two, bringing the pandemic total to 328.

Long-term care facilities continue to see a rise in cases, as well as the two deaths announced by the governor. There were 20 new cases involving residents and six of the staff. The total number of cases now stands at 941 residents, 380 staff and 191 deaths, all but two involving residents. Positive tests have now been found at 90 facilities across Kentucky.

Lt. Gov. Jacqueline Coleman spoke about the Team Kentucky Fund to help those adversely impacted by the coronavirus and said the application portal will be live at 8 a.m. by going to teamkyfund.ky.gov.

“The folks who qualify are those who have experienced a loss of employment or a reduction of their income of 50 percent or more due to COVID-19,” she said. “That can be a cut in hours or a cut in wages, due to the outbreak. Assistance will be provided in the form of vouchers, which can be used for rent, mortgage, electricity, gas, water, and groceries.”

The limit per household is $1,000 and Community Action Kentucky will distribute the vouchers, according to Coleman, who added, through the generosity of Kentuckians, there is $3 million in the fund.

Those wishing to contribute to the fund can go to donate.ky.gov. Coleman says all donations are tax-deductible and 100 percent of the money raised goes directly to Kentuckians.

Beshear also announced that the Education and Workforce Development Cabinet is receiving $43.7 million from the federal Coronavirus Aid, Relief, and Economic Security Act, or CARES, for education programs that have been affected by the coronavirus pandemic.

A total of $30 million will go toward K-12 technology assistance and food programs. The Kentucky Department of Education is working directly with school districts on their specific food costs and technology needs, and funds will be allocated accordingly to districts. The remaining $13.7 million will be administered by the Kentucky Council on Postsecondary Education and used for relief in public and private higher education institutions.

J. Michael Brown, secretary of the Executive Cabinet, reported there are still only four hospitalizations at the Green River Correctional Complex, two inmates and two staff.

Retesting is continuing among the prison population, especially the medically vulnerable ones.