NATIONAL GUARD TO CONDUCT IN-PERSON ELECTION IN ALL KY COUNTIES?

“Not for sure yet, Jobe said. “We are still in planning stage. Our County Board of Elections will be meeting soon.”

Jobe said even if the National Guard does take over in house voting, some local election officers will be used. “We will have some of own elections officers,” Jobe said.

The state is encouraging the use of absentee ballots during this election.

Here is the Governor’s election statement from Thursday.

Last month, Gov. Beshear and Secretary of State Michael Adams agreed to move the primary elections to June 23 and to allow everyone to request absentee ballots. The Governor noted that voters in Jefferson County already can request an absentee ballot through the County Clerk’s Office website. An online portal for all voters to request the ballots is being created.

The Governor said National Guard leaders offered to help and members will work as poll workers and keep polling places operating safely. The Governor said he was proud of the guard for stepping in to help where in-person voting is necessary.

“We literally are spread out across the entire state and I would venture we probably have soldiers or airmen who live in virtually all 120 counties,” Lamberton said. “So it quite simply is a common-sense solution for the issue.” 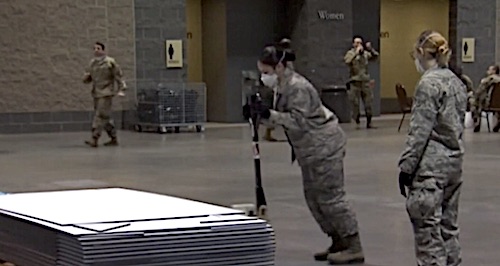