ALL SPORTS CANCELLED FOR YEAR BY KHSAA

Big blow to Lawrence Co. Athletics with Baseball and Softball along with Tennis and Track and Field were expecting to all have big seasons. 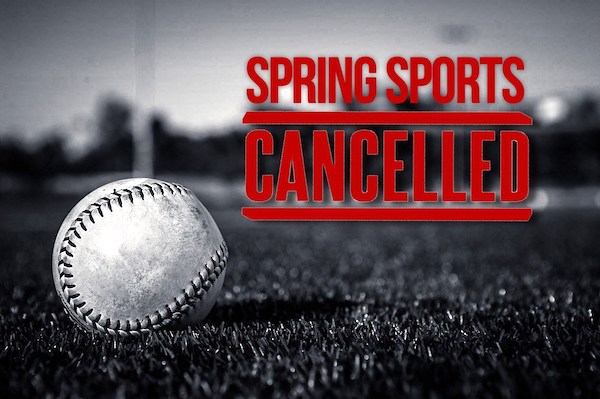 Lexington, Ky. —  It is now official.  All Spring Sports and both State Basketball Tournaments will not be played this season after the announcement yesterday of the recommended closure of all K-12 schools to in-person instruction throughout Kentucky for the remainder of the school year.

The KHSAA Board of Control today approved the Commissioner’s recommendation and announcement by unanimous vote that the 2020 state basketball tournaments will not be resumed, while also approving the cancellation of all regular-season practices and contests as well as all postseason tournament championship events for all spring sports and sport-activities for the 2019-20 school year.
This means the termination of the Archery, Bass Fishing, E-sports, Baseball, Softball, Tennis, and Track & Field seasons.
This will also result in the continuance of all provisions of the Coronavirus Dead Period provisions until further notice to the member schools from the Commissioner.

“… The KHSAA has worked closely and continuously with the Governor of our beloved Commonwealth, representatives of the Department of Public Health, Interim Commissioner Kevin Brown and the Kentucky Department of Education, as well our member schools and their superintendents, state and local authorities, and under the guidance of best practices distributed by the CDC since the start of the COVID-19 virus outbreak. The Association staff and its Board of Control unequivocally support Kentucky Governor Andy Beshear and his aggressive actions to protect our citizens during the COVID-19 virus outbreak, and the timetable that has been laid out by the President and Federal Government in Washington for a return to activities. We are thankful to have these exemplary leaders providing guidance and recommendation for care to all Kentuckians.

“We have until this point purposely taken a measured approach to the resumption of our basketball events and consideration of the ending of the spring seasons for sports and sport-activities,” stated KHSAA Commissioner Julian Tackett. “We have accepted continual guidance from a variety of sources, and have steadfastly held on to hope that the great student-athletes who represent their schools through a variety of teams would have an opportunity to compete this season.

“This is without question the most challenging period I have seen or faced in thirty-six years in this office. This impacts so many people, but in the end, is in the best interest of public health. We have been especially concerned with the graduating class of 2020, those seniors who put so much into their athletic participation opportunities hoping for one last time to shine before the home crowds or at postseason events. We know for the vast majority of them, their future plans are already laid out, with college and career final preparation as their next chapter. We are also keenly aware that per almost all metrics, 94% of the students who participate in high school sports and sport-activities are involved in their last organized competition while in high school, as the lion’s share of participants will not play beyond this level. In the end, however, the health and safety of all individuals, participants, coaches, and spectators, is much more important than the various interscholastic activities.

“Nothing in mine, or frankly, anyone else’s professional career completely prepared me for this situation since mid-March and the related subsequent decisions. That was probably the hardest thing to deal with,” added Tackett. “These kids don’t get a chance to finish, especially the seniors, and it is as though they were robbed by an invisible enemy. It is sometimes a little easier in life when there is someone to blame. With this, however, there isn’t. We are all together fighting the same enemy with the same desired outcome.

“Everyone involved in school-based athletics in our Commonwealth has been impacted. We as a staff and Board have talked every day about the students and families, coaches, administrators, officials, and fans who lost a non-recoverable portion of their lives, particularly our seniors. Corporate partners and others, while continuing to be fantastic supporters of the KHSAA and almost all agreeing to continue their full support of the Association and its events during these financially catastrophic times, also missed out on great opportunities. And our venues and their employees were also tremendously fiscally and personally impacted. There were, and are, no winners in this situation and these decisions.

“The Association will continue to communicate with member school Principals, Athletic Directors and Superintendents as we navigate the various stages and phases of resuming sports and sport-activities for the fall. The current virus dead period provisions will remain in place until, at the very least, we as a Commonwealth are cleared to be considered into Phase 1 of the Federal and State guidelines. Before that time, staff will advise our member schools as to any changes to the restrictions moving forward. There is also no plan at this time to alter, in any way, the Bylaw 24 Dead Periods for the coming or specific restrictions on organized activity in football and basketball that is also contained in that bylaw.

“We have recently developed special recognition programs which we hope our schools will take advantage of, to recognize at the very least the seniors who lost that last season, but also all spring sports participants and those who qualified for the state basketball tournaments and were unable to complete those events.

“We will also continue to communicate with our teams that qualified for the basketball tournament and were unable to complete this event about possible activities within the bylaws of the KHSAA at the start of the 2020-21 season if they desire that opportunity. Unfortunately, our spring sports never began and as such, there represents no resumption or event opportunity.

“There is no doubt that people will second-guess this recommendation and decision as well as all others made during this pandemic and its fallout. I would encourage anyone who objects or has drawn their own conclusions to carefully review a couple of well-written articles about incidents that happened at the start of this situation, not in our state but just north of us added Tackett. “I realize there seems to be some thinking in limited circles about specific groups being the only ones impacted or other rationalization for us resuming early (too early). These articles carefully break down an event similar to what we would see in our schools. I doubt that the objectors regarding the cancellation of sports will finish reading without a somewhat revised opinion.”

KHSAA Board of Control President Pete Galloway stated, “Our students, coaches, officials, administrators, parents, and families must be encouraged in every manner to continue to adhere to the guidance provided by our state and national leadership. The Association understands the extreme seriousness of this pandemic and joins in support of current measures being implemented, as well as any future considerations, to ensure a return to normalcy. In unwavering support, yet with extreme sadness, we must agree to cancel our spring sports and sport-activities. We join all Kentuckians in anticipation of a triumphant homecoming back to our schools and school facilities at some point in the fall of 2020 complete with a full complement of KHSAA sports and sport-activities.”

The Board and staff will continue discussions over the coming weeks to attempt to address issues related to the fall season.

“It is far too early in this process and battle against this virus to place an absolute planned schedule or dates out there,” stated Commissioner Tackett. “We remain optimistic about the fall season, even if it isn’t exactly per normal, but we will adhere to the guidance of both federal and state health officials, as well as our own Department of Education and the Governor’s office in planning our next steps in the coming weeks and months.”

The Association continues to remind its member schools and the general public to follow the guidance of the governor and the Kentucky Department of Public Health via http://kycovid19.ky.gov/.

This is big blow to Lawrence Co. Athletics with Baseball and Softball along with Tennis and Track and Field were expecting to all have big seasons.