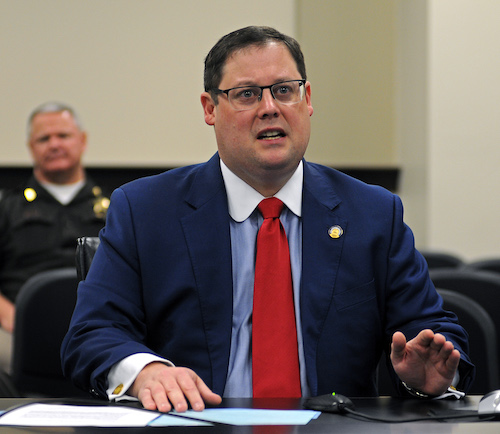 Despite the significant challenges created by the COVID-19 pandemic and the associated restrictions, the 2020 Regular Session of the Kentucky General Assembly has completed its work for the 2020-2021 budget session and has adjourned sine die.

With a reduced staff and no visitors, efforts to promote social distancing left the marble corridors of the Capitol much quieter than usual for the final days of a budget session. However, the legislature continued to  work tirelessly to complete the people’s business in a timely, but healthy manner, meeting only 53 legislative days—seven days less per the Kentucky Constitution.

The 2020 Regular Session came to a close late Wednesday following several hours of final legislative business in the chamber. The House and Senate spent most of the last 24 hours of the session taking turns recessing to wait for the other chamber to catch up on pending business. The tedious process of concurrence and veto overrides almost resembles a game of chess, but nonetheless essential to ensuring the integrity of the Commonwealth’s legislative process.

Early this week, both chambers voted to override the governor’s veto of Senate Bill 2, legislation that will require voters to present photo ID at the polls. Even in these difficult times, it is important that we maintain the integrity of our elections. In recent years, we have had many races determined by single digit vote totals; therefore, we must do what we can to ensure that our voter registration logs are up to date and that voters are who they say they are. Under Senate Bill 2, voters have the option to provide any ID with their photo on it such as a student ID or employee ID. Voters can also provide their social security, food stamp, SNAP benefit, and more. Not only does Senate Bill 2 include provisions for a free ID for those who do not have one, the bill also maintains the ability for a poll worker to verify they know a voter, and offers the option of voters who do not have an ID to sign an affidavit and submit a provisional ballot.

Under Senate Bill 2, voters have the option to provide any ID with their photo on it such as a student ID or employee ID. Voters can also provide their social security, food stamp, SNAP benefit, and more. Not only does Senate Bill 2 include provisions for a free ID for those who do not have one, the bill also maintains the ability for a poll worker to verify they know a voter, and offers the option of voters who do not have an ID to sign an affidavit and submit a provisional ballot.

It is important to note that Senate Bill 2 will not become state law until ninety days after the end of the legislative session, so it will not be pertinent to the primary election currently scheduled in June. This gives Kentucky voters enough time to obtain a photo ID should they not already have one. I was happy to support this legislation and see its final passage upon the veto override.

House Bill 387, amended to assist with coronavirus relief, allows the governor to declare it a “necessary government expense” to purchase protective gear for health workers and first responders. The bill also includes a provision to  permit the governor to use unrestricted state funds, such as the rainy day fund, to pay for them.

Another COVID-19 relief measure, contained in Senate Bill 150, loosen requirements for unemployment benefits and extend help to self-employed workers and others who would otherwise not be eligible.

It will also expand telemedicine options by allowing out-of-state providers to accept Kentucky patients, provide immunity for health care workers who render care or treatment in good faith during the current state of emergency, extend the state’s income tax filing deadline to July 15, address open meeting laws by allowing meetings to take place utilizing live audio or live video teleconferencing, and require the governor to declare in writing the date that the state of emergency ends.

Additional bills that the General Assembly approved include measures on the following topics:

Addiction treatment: Senate Bill 191 addresses certification and educational requirements for alcohol and drug counselors. The bill also directs Kentucky to establish guidelines employers can use to develop programs to help more individuals struggling with substance use disorders while maintaining employment.

Taxes: Senate Bill 5 will require library boards, and other so-called special-purpose governmental entities, to get approval from a county fiscal court or city council before increasing taxes.

Marsy’s Law: Senate Bill 15 would enshrine certain rights for crime victims in the state constitution. Those would include the right to be notified of all court proceedings, reasonable protection from the accused, timely notice of a release or escape, and the right to full restitution. Senate Bill 15 is tied to a national movement to pass statutes that have been collectively known as Marsy’s law in honor of Marsy Nicholas, a 21-year-old California college student who was stalked and killed by an ex-boyfriend. A similar proposed constitutional amendment passed the General Assembly in 2018 and was subsequently approved by voters, but the Kentucky Supreme Court ruled that the law was invalid due to unconstitutional ballot language.

Kentucky voters will decide on the proposed constitutional amendments this November.

This week, the Senate said farewell to a few retiring members, including Senator Ernie Harris (R-Oldham) and Senator Stan Humphries (R-Cadiz). They have served Kentucky and their constituents well and we wish them health and happiness in their future endeavors.

The 2020 Regular Session was certainly unique. I will be sending a more detailed wrap-up of legislation passed in the coming weeks. Thank you for your support, criticisms, questions, and comments throughout this session. Your involvement is truly appreciated.

It’s great to be home, reunited with family. I hope to see you out and about in the coming year.  Take care and God bless.

If you have any questions or comments about these issues or any other public policy issue, please call me toll-free at 1-800-372-7181 or email me at Phillip.Wheeler@LRC.ky.gov.

Note: Senator Phillip Wheeler (R-Pikeville) represents Kentucky’s 31st State Senate District, which includes Elliott, Lawrence, Martin, Morgan, and Pike Counties. Senator Wheeler serves as Chair of the Natural Resources and Energy Committee, the co-chair of the Public Water and Wastewater System Infrastructure Task Force.  He also serves as a member of the Senate Standing Committees on Judiciary, and Appropriations & Revenue. Senator Wheeler is also a member of the Budget Review Subcommittee on General Government, Finance and Public Protection; the Program Review and Investigations Committee; the Government Contract Review Committee, and the 2020-2022 Budget Preparation and Submission Statutory Committee. For a high-resolution .jpeg of Senator Wheeler, please