When will payments go out if the coronavirus stimulus bill passes?

When will payments go out if the coronavirus stimulus bill passes? Soon, McConnell says 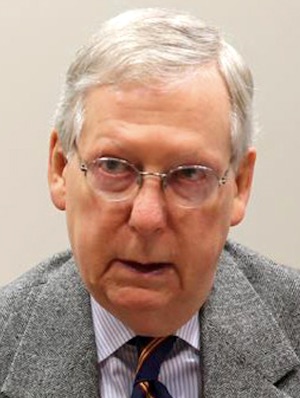 If the U.S. House of Representatives approves the massive coronavirus stimulus package in a vote Friday, according to U.S. Senate Majority Leader Mitch McConnell, direct payments should be on their way across the country soon after.

In an interview Thursday afternoon with Terry Meiners on the Louisville radio station 840-WHAS, McConnell said senators hope to have money set aside for individuals in the $2 trillion relief proposal to families “within a week or two.”

“We structured this whole deal with that in mind, and we rejected a lot of delivery mechanisms that we thought were too slow,” McConnell told 840-WHAS. “The secretary of the treasury’s convinced that by the week after next, at the latest, we can get this relief out.”

The Senate approved the record-breaking $2 trillion stimulus package Wednesday in a unanimous 96-0 vote. It aims to offer financial relief to people and businesses that have been impacted by the COVID-19 coronavirus pandemic — in part by sending direct payments to a large number of Americans.

Most adults would receive $1,200 under the plan, with an additional $500 for children ages 16 and under. (Single adults who make $75,000 or less will be eligible for the full amount, while those with little or no tax liability will receive at least $600, and payments phase out for adults making more than $99,000 per year).

The bill also gives small businesses access to $350 billion in federal loans to cover payroll, rent and other monthly expenses. Those loans will not have to be repaid, McConnell said, if the businesses avoid cuts to their workforces.

“What we’re saying to businesses is, ‘Don’t lay your people off. We’re going to in effect compensate you for this short period of time here so that you won’t lose anything by keeping them on the payroll,’” he said. “Big businesses are important as well. They employee an awful lot of people, and there are other avenues for them to receive support as well if they need it.”

McConnell said he hopes to see the bill pass Friday and that there was a chance it could pass with a voice vote, which would fast-track it to President Donald Trump for approval without forcing all members of the House to return to the nation’s capital to weigh in. Rep. Thomas Massie, though, hinted earlier Thursday that he might object to a voice vote in an interview the Kentucky congressman gave to Cincinnati’s 55-KRC radio.

Still, McConnell — who urged Americans to stay indoors for the time being and follow advice from Dr. Anthony Fauci, director of the National Institute of Allergy and Infectious Diseases — expressed optimism as to how the proposal would help the country.

“This bill provides direct financial help to the American people, rapid relief for small businesses and their employees, significant steps to stabilize our economy and protect jobs, and of course we’ve appropriated a massive amount of money to go to health care workers, professionals, physicians and others who are dealing with all aspects of this problem,” McConnell said.