LIBRARY BOARD HEARS COMPLETION DATE OF NEW ADDITION IS JULY 17

$30,000 security camera system approved by board

The meeting was called to order by chairman John Osborne. The first item on the agenda was approval of the January minutes. Suzie Chambers and Kim Burchett made motions to approve it.

They also made motions to approve the security camera systems which will have a total of 27 cameras. Sixteen cameras will be outdoors and 11 indoors. The total will come to around $29,012.76. The will be state of the art cameras which comes with a 5 year software license. Elliot’s crew will be installing them.

Construction Manager Heath Preston had to get a change order approved about one section of the roof which was not going to be redone, as it wasn’t in bad shape but the three adjoining parts of it would be new and putting new rubber parts against the used one would have voided the warranty for the rest of it.

They motioned to go ahead and replace that one part so it wouldn’t have to be replaced in a year or so.

Preston also said that AEP will be setting a new pole, the old one is an AT&T pole.

He said they got the new edition measured for all glass today, so they can go ahead and order it. They will have the measurements for the metal handles by the end of the week, which will be ordered from Thunder Max Metals in Australia.

The new library will have a fireplace in it, which will be really cozy. Preston said they will have to extend the book drop off just a little more to make it work. Citizens will be able to drop off books and movies after hours with this drive thru book drop off.

Contractors are currently tearing out concrete outside and will be tearing out walls on the inside and starting on the electrical work. There will be a bigger and better kids area, new employees station and much more to come. They will be installing new air conditioners Tuesday.

Preston estimates that the completion of the library will be on 7/17/20 if all goes on schedule.

The Staff evaluations were made and the meeting was adjourned. 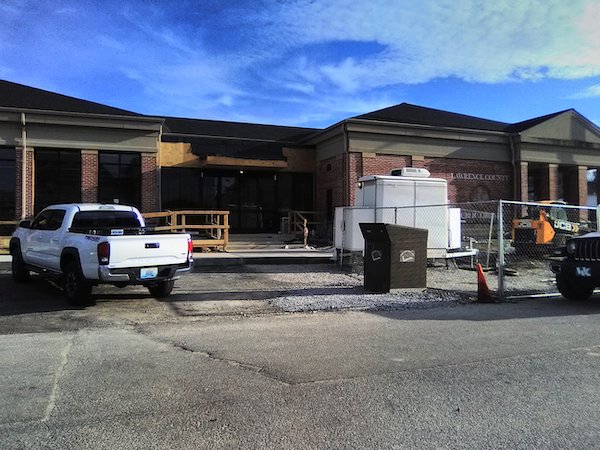