Bulldogs comeback comes up short; Martin Co. headed to the State Tournament for the first time in 37 years 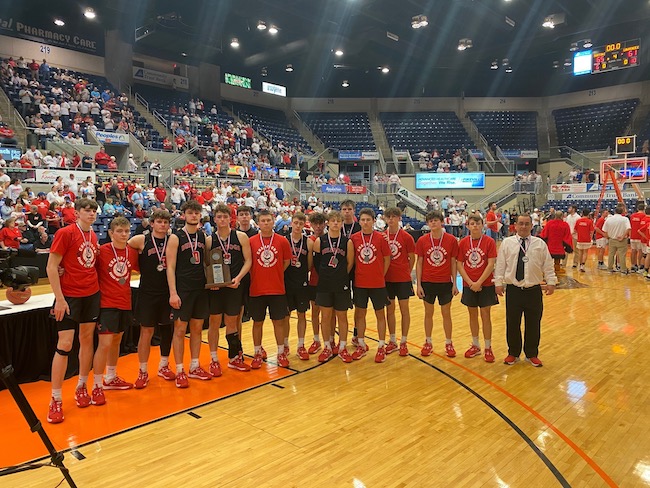 The Bulldogs hit a three pointer to open the scoring before Martin Co. went on a 13-0 run midway through the first quarter. Lawrence Co. regrouped to finish the first on a 8-3 run and closed the gap to 16-11 Cards after one period.

In the second quarter Martin Co. continued to play well and finished the first half 4 of 8 from deep to lead 32-23 at the break. The Dawgs stayed within striking distance with 5 three pointers. Braxton Maynard and Trey James scored 10 apiece for the Cardinals and Tyler Maynard scored 11 for the Dawgs.

Brady Dingess scored the first five points of the second half to push the lead out to fourteen, But Lawrence Co. hung around before the Cardinals once again went on another run to make it 44-29 midway through the third quarter. The Bulldogs chipped away at the deficit and trailed 48-37 heading into the final stanza.

In the fourth things got a little hectic as the Bulldogs made a furious comeback as Trenton Adkins nailed a couple three pointers and the intensity on defense picked up and the nearly 3,000 people in attendance were on their feet cheering for both squads as they gave it all they had the final eight minutes.

Lawrence Co. hit six three pointers in the fourth period alone including a Cody Maynard three pointer with 27 seconds left to make it 63-61, Cardinal Junior Jordan Dalton hit 1 of 2 and Lawrence Co. had a good look to tie it from the corner on an Alex Ratliff three pointer but it came up short and Martin Co. grabbed the rebound and hit 1 out of 2 free throws to make it 65-61. The Dawgs missed a couple more three pointers before time expired to set of a wild celebration as Martin Co. was headed back to the State Tournament for the first time in 37 years.

Martin Co. will head to Rupp Arena and play the winner of the 3rd Region winner either Owensboro or Owensboro Catholic on Thursday March 19th at 1:30pm.

“… What a ride this season has been! We are so thankful for such a great following from our friends, family, and community members. Although we came up a little short of our ultimate goal, these guys have nothing to hang their heads about. They put their heart and soul into the name on the front of their jersey. As a coach, all you can ask for is effort and energy, and these guys brought that every single night.”

“ A special thank you to everyone who supported our program and these four seniors throughout the year. If anyone deserves a great following, it would definitely be these guys. This team has set a new standard for our program! The future is bright for Lawrence County Basketball.”