Pikeville, Ky — Trenton Adkins grabbed an offensive rebound and scored while getting fouled with 3.1 seconds left to propel Lawrence Co. ( 22-11 ) to a 63-61 victory over Shelby Valley ( 25-8 ) in the semifinals of the 15th Region Tournament Saturday night at the Appalachian Wireless Arena.

Lawrence Co. led 33-28 at halftime after Adkins scored as time ran out to end the first half. Cody Maynard continued his stellar play with 13 points in the first 2 quarters.

The Dawgs once again played well in the third quarter with a 15-2 run including 11 straight points to take their biggest lead of the game at 50-36 and would lead by 12 points going to the final stanza.

In the fourth quarter Shelby Valley stormed back to take the lead with 31.1 seconds left 61-60 behind four straight free throws from Kaden Robinson.

After a Bulldog timeout and a jump ball that kept possession with Lawrence Co. as the clock set right at 10 seconds,  the Dawgs called timeout and set up a play they worked on in shoot around Saturday morning and Adkins gathered the Tyler Maynard miss that slipped through two Wildcat players and put in the left handed shot and absorbed the contact and the Bulldog faithful roared with appreciation. Adkins nailed the free throw for the two point lead and a desperation three point attempt from Keion Worrix came up short and the Bulldogs are one game short of playing in Rupp Arena.

Lawrence Co. was paced in scoring by Cody Maynard with 21 points, Tyler Maynard had 18 points 6 boards and 5 assists, Trenton Adkins tallied 13 points and 7 rebounds, Baden Gillispie 7 points, Chase Sartin 4 points and 10 rebounds including 7 on the offensive side, CJ Fairchild and Alex Ratliff did not score but were very effective off the bench combining for 4 rebounds and 1 assists in 21 minutes.

The Wildcats were 6 of 26 from beyond the arc and hit 17 of 20 from the charity stripe.

Lawrence Co. will make their fourth appearance in the 15th Region Championship game on Monday at 7:00 vs Martin Co. ( 21-12 ) who will be making their first appearance since winning the Region in 1983 as Sheldon Clark High School.

“… We just practiced those special situations this morning and thank the lord that we did, we ran both side out of bounds plays tonight. We knew they were going to guard Tyler hard coming out and tried to get it close to the elbow and he got a good look and Trenton has been huge at that all year and he continues to do it at the right time.”

“… I’m so proud of these kids, it’s another great win. To beat both Paintsville and Shelby Valley in three days is awesome but I know these kids aren’t satisfied and hopefully we can give ourselves a chance against Martin Co. on Monday night.”

“… We did a good job on Potter in the first half he is a great player and holding him to two points was great but we told our kids they are going to make a run and it lasted a little longer then we wanted that’s for sure. I kept telling our kids to hold their composure and keep up the intensity.”

“… This is one we will remember for a long time. It was a great atmosphere and I can’t thank our fans enough for their support tonight and the entire postseason hopefully they will be out in full force Monday night.”

“…Martin Co. is a great team with a lot of talent. They have beaten us twice this year. We played them a little better the last time out. We will enjoy this one for a little while and then get to work on a game plan for them. We are playing Monday so it really don’t matter who it is. We will play the Lakers if they told us to.”

Trenton Adkins finishes off the three point play to send the Bulldogs into the 15th Region Title Game. VIDEO 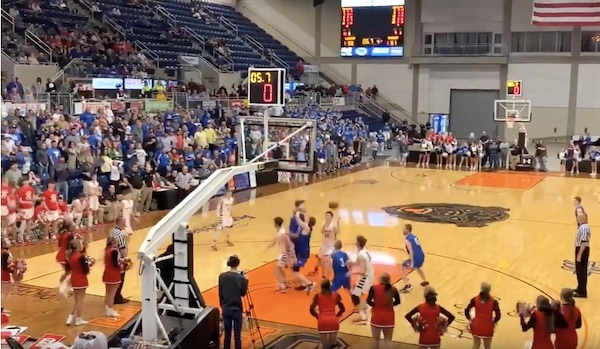 “… I’m always reading to see where the shot is going to go and try to be in the best spot and this time I was in the right spot at the right time. I made the basket but this win is all about our team. We knew they were going to go on a run, Coach told us to keep our composure and keep up the intensity. We needed to get some stops down the stretch. We lost in the first round of the District last year and we came into this season with a different mindset. First year Coach and he has instilled that into us. Excited for Monday night and another shot at Martin Co. we are ready to rock.”

Martin Co. looking for first Region title since 1983 after beating Pikeville in the semis