Pikeville, Ky — Lawrence Co. ( 19-14 ) fell behind 11-0 and never quite recovered falling 69-51 against Pikeville ( 24-7 ) in the first round of the 15th Region Girls Basketball Tournament at the Appalachian Wireless Arena Tuesday night.

Pikeville hit 5 three pointers in the first period and led 17-9 after one after starting the game on a 11-0 run.

In the second quarter the Lady Dawgs found their footing and cut the lead to 31-27 at the break.

Pikeville extended the lead in the third quarter even though the Lady Bulldogs cut it to four points on several occasions and led 51-41 after three.

In the fourth the Lady Panthers continued to play well and advanced to the semifinals with the win.

Lawrence Co. was led by Kensley Feltner with 23 points, and also pulled down 12 rebounds, dished out 6 assists and blocked 4 shots. Lexi Ratliff went 3 of 4 from beyond the arc for 9 points, Tyra Hammond 5 points, Kaison Ward 4 points and 6 rebounds, Ellie Webb and Brooke Neal 3 points each, Kyleah Ward and Abby Nelson 2 points each.

The Lady Bulldogs hit 5 three pointers and went 10 of 19 from the foul line.

The Lady Panthers hit 8 three pointers and went 17 of 19 from the charity stripe. 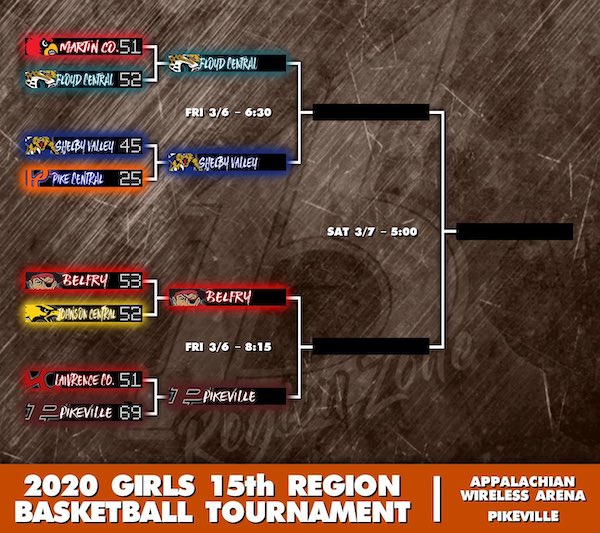 Pikeville will play Belfry in the second semifinal Friday night at 8:15 after the Lady Pirates beat Johnson Central 53-52 in the first game Tuesday.

“… Obviously this wasn’t the way we wanted our season to end but we are extremely proud of our girls. What they’ve accomplished can never be taken away from them. They will always be known as the team who won the first district championship. They are a very special group of girls on and off the floor. God has richly blessed us to be able to be a part of their lives.”

“… We will miss Lexie tremendously. She has been a great leader for this young bunch of girls. She has given so much to our program and we are very thankful for her. She is going to attend EKU in the fall and she will be very successful in her field of study. She is a great person on and off the court. We love her and will miss her.”

“… Looking ahead at our future it’s very bright. We return a lot of very special players. We were extremely young this year and have gained some great experience that will continue to drive these girls to get better this off season. We want to accomplish so much more this next season. We will let their bodies recover a little bit and get back to work to get ready for next year. We are definitely excited about what the future holds.”