Draw for Regional brackets is Saturday at 2:00 pm

District Champs for the first time in school history 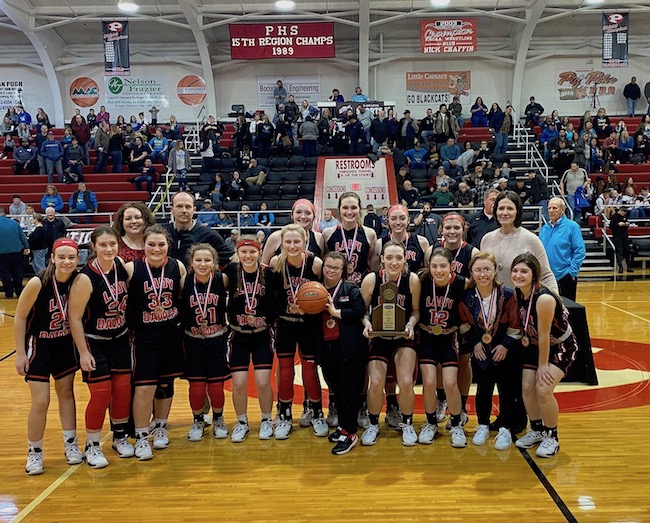 Lawrence Co. Senior Lexi Ratliff hit two free throws with 4.8 seconds left in overtime and then stole the inbounds pass just past half court as the clock hit triple zeros.

In the first period the two teams traded buckets with Lawrence Co. taking a 12-10 lead.

In the second Lawrence Co. led 22-17 before the Lady Jaguars went on a 7-2 run to knot the score up at 24 all heading to the break.

In the third period it was much of the same before Katie Moore hit a long three pointer right at the buzzer to give Floyd Central a 36-33 lead going to the final stanza. 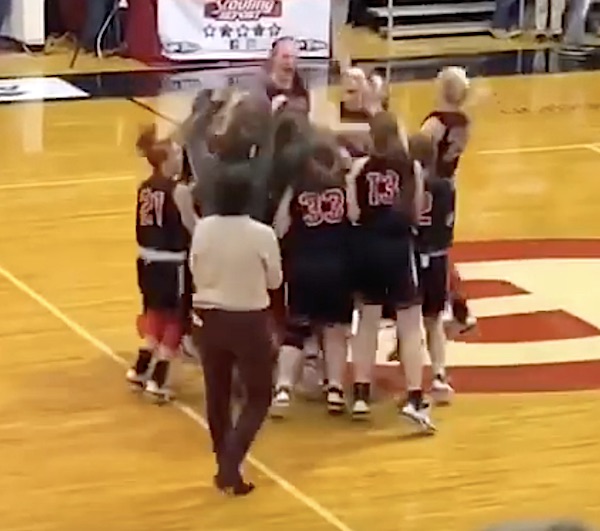 Floyd Central hit another three early in the fourth which made it 39-33 for their biggest lead of the contest. LCHS fought back with a furious rally to tie it up at 44 with just under a minute left. The Lady Jaguars held for the final shot but it would not fall and the game went to overtime tied at 44 all.

Lawrence Co. scored the first six points of the extra session before Grace Martin hit a three pointer to cut the lead in half.

The Lady Dawgs scored the next four points and built a seven point lead with 1:13 left and forced a Lady Jaguar timeout as the Bulldog faithful went wild. In the final 1:13 Floyd Central hit 2 three pointers and Lawrence Co. missed three straight front ends at the foul line, which gave the defending champs a chance for the win trailing by one point. Katie Moore missed a jumper in the lane and Lexi Ratliff was fouled and calmly made two free throws to set the final score at 56-53.

The Lady Bulldogs hit 3 three pointers and went 11 of 17 from the charity stripe.

The Lady Jaguars hit 7 three pointers and went 8 of 12 from the charity stripe.

58th All District Team (from LC)

Both teams will advance to the 15th Region Tournament at the Appalachian Wireless Arena in Pikeville next week. The draw will be at 2:00 on Saturday.

“… At first I was shocked like we really just did that. The girls really grew up tonight, We went through tough stretch of games in January losing three in a row and six out of seven but I knew it would pay off. Our schedule was tough all year and it prepared us for tonight. They are mentally tough. Absolute unreal feeling right now, to be the first team in school history is amazing. I’m so proud to be a Bulldog.”

“… We knew it was going to be tight game, we have practiced different situations to prepare us for anything that we faced tonight. We needed to get over this hump and then we got down six points and we called timeout and told them that they were afraid to win and challenged them during the timeout and they came out and responded like Champions.”

“… I knew when I took this job that I loved the program and this was bigger than them. That girls in the fifth and sixth grade would come along it’s more than just right now. As a former player I couldn’t be more excited and more proud to be a Lawrence Co. Bulldog. We are going to hang a big banner the first one ever I’m super pumped for this group. I’m proud that we got over the hump. We have said all year that nobody wants to draw us and we will be a tough out for anybody next week in the Region Tournament. Can’t wait for the Draw on Saturday.”

“… It’s everything I have imagined and more it is an unbelievable feeling. Ever since I was a freshman I have been working towards this and for it to be my senior year makes it even more special, great great feeling.”

“… We freaked out a little bit when we got down six points but then Brooke hit a big shot and we got our confidence back and then amped up the defense as well. In overtime we were able to score early and then hang in at the end. I wanted to be at the free throw line with the game on the line I have confidence at the line and knew I was going to knock them down. I knew then we were going to be District champs for the first time in school history.”