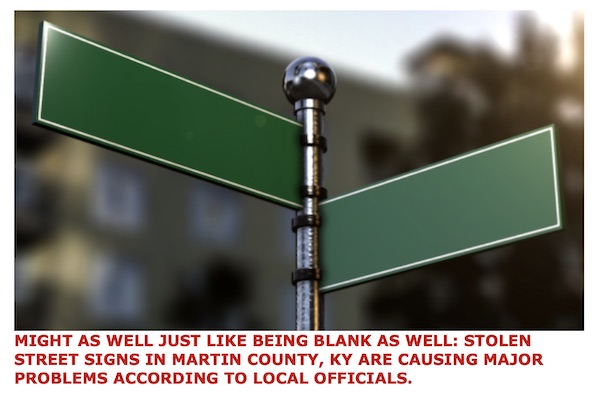 SIGNS OF THE TIMES? MARTIN COUNTY OFFICIALS WARN AGAINST THE GROWING PROBLEM OF THOSE WHO ARE COMMITTING THE THEFT OF STOLEN STREET SIGNS

Residents of several area parts of Martin County, Kentucky have been lately dealing with street signs being stolen, causing various major problems for the city leaders in Inez.

“The signs cost about $35 a piece and you go figure if you steal 10 signs in my district that’s 350 dollars, right off the bat. And we don’t budget for stuff like that,” according to Magistrate Derrick Stepp.

Magistrate Stepp stated stealing them is not that difficult.

“It’s not too hard, if you just wiggle the post in the ground, you can pull it back out,” Mr. Stepp stated . “But as long as it’s got some concrete around it, maybe that will help deter some of the theft — won’t be as easy for them to steal anyways.”

These actions of unusual horseplay will not go unnoticed by county law enforcement.

“If you are caught, you will be arrested and charged,” warned Martin County District 4 Constable Brad Preece.

Constable Stepp wants to remind the community they aren’t meant to be “collector’s items.”

It could put people in serious danger, by causing confusion for first emergency responders trying to reach emergency calls.

“It could be their own family, or their own home on fire, and you need to understand that if a fire truck or ambulance cannot get to their house because they don’t know where they are going, or the name of the road, if they can’t find it,” Magistrate Stepp said. “It can be a death-or-life situation. You don’t want to risk that.”