GROWING UP IN LOUISA: Floods, Events

There is a common saying that was based on the Bible that goes like, “Good Lord willing and the Creek don’t rise.” Used as a potential disclaimer of a promise to show up at an appointed time, date, or event, it means ‘if we have control, we will be there.’ Just saying it aloud reminds me of the little town on that muddy river that seasonally saw rising water creeping up the steep banks toward streets of town. In nearby cities I remember looking out of our car window to see great floodwalls. I asked my mom what they were and she explained that those were closed to block the flooding and save the city. Otherwise, a rampage of water could be devastating if allowed to reach the streets of the city. During these last few weeks I have read of that suffering and destruction being experienced in eastern Kentucky, as well as other places across the country. My heart goes out to those affected by the floodwaters. 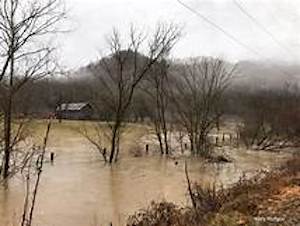 I remember once as a young man I walked downtown and ventured toward the banks of the Big Sandy during what I learned was flooding. I was at the foot of the Louisa/Fort Gay Bridge, just next to the Riverview Hospital where my Great grandfather once served as a doctor. I took a few steps on the wooden boardwalk on the southern side of the bridge but thought at once that it was unsafe. At that time the bridge was surfaced with steel grating for vehicles but the pedestrian walkway was still covered with wooden planks. That day I saw something I had never seen before. The swift moving waters were nearly touching portions of the bottom of the bridge. The water was dirty and full of all kinds of debris, including what looked like chicken coups and other structures floating downstream toward the great Ohio River just a few miles away. There was little doubt to me that the bridge itself was at risk when a floating pile of debris struck it and then built up for a moment before ducking underneath to continue its journey toward the locks which had been inoperable for years. I backed away wondering how many other bridges had been swept away from somewhere upstream. It was scary even for this nearly grown boy. I wondered if there were people caught up in the disaster.

I had been told that the house we lived in when I was born, the southern-most home on Water Street near the school bus garage, had lost a lot of its backyard to the river. Granny told me the backyard was once a large and grand place to play for her growing brood. When I saw it last the river had eaten and encroached the bank and eventually may claim the house. When old doc Wray passed on to the beyond, my granny sold the house and moved to the corner of Clay and Franklin. At this site flooding was no longer an issue, but for thousands of others up and down the rivers it remains a threat after the melting of heavy snows or heavy rains. 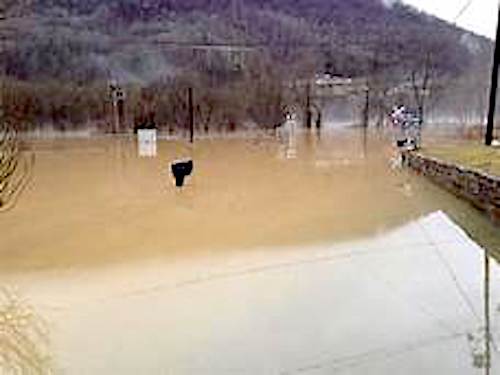 During my early school years my mother daily walked the planks of the pedestrian portion of the bridge to catch a ride to her job in Huntington, WV. After a time she stayed with relatives in Huntington during the week, coming home on weekends. My mother was deathly afraid of heights so a walk on those boards above the water had to be torture for her. Later, I would walk the same way to play baseball on the field behind Fort Gay High School. As it happened, I never had to cross during flood stage, but saw many times that the river was nearly dry. That’s another story.

That old bridge was replaced with a concrete structure that is more like similar bridges being constructed today. It remains unique in that it continues to connect two towns, two states, two counties, yet has three entrances from three pieces of land. The old joke about giving directions by saying ‘take the bridge and make a right when half-way across,’ remains and is well-worn, I’m sure.

I remember that in those days the bridge/culverts to cross little creeks like Lick Creek would not support the weight of a school bus, so kids from High Bottom had to walk out to the highway to catch a ride to school. I’m sure there were many places that forced the school kids to walk a ways.

I remember a horrible time when a school bus went into the flood waters and the nation listened to radio broadcasts from the scene. Several kids from the same families were lost in the cold, muddy Levisa. Some managed to escape by swimming to the bank, but many would remain in their yellow tomb while parents stood watching and hoping beyond hope their child or children would be safe. 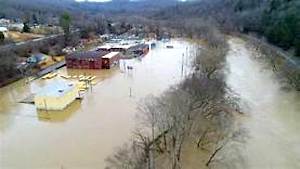 I remember footbridges, swinging bridges, and many other kinds of wooden bridges that were sprinkled around the county, but the thing is that all those bridges were subject to serious problems during flood season. All around Lawrence County and neighboring counties, people’s lives were put in jeopardy with rising waters, and apparently still are. As we see, it wasn’t always just the bridges, either, but roads washed out, too. In a lot of cases the roads that went through our valleys eventually swelled and destroyed lives and property. In the earliest days they were but a graded gravel road and easily subject to washouts. Still, today, Mother Nature has its way and even the paved roads lose when the water rises. In mountainous regions we see ‘flash floods’ where a wall of water rushes downstream to take out everything in its path. Caused by heavy rains in the hills, or perhaps a broken dam, lives change in an instant.

The thing about Americans, and Kentuckians is the freely given support of the coming together of the communities. It is through standing together in tough times that makes going on possible. Our people are quick to support each other with material goods, and our prayers. That makes rebuilding of our lives possible. I know that mountain people are a tough breed accustomed to tragedy who stand ready to help those in need facing another life’s trials.

ps: To those who knew my cousin, Julia Chapman, 74, class of ’63, be informed that she passed away this week in California, her home for many years. We shall miss her fun spirit and kindness. See Lazer obituary section for more…