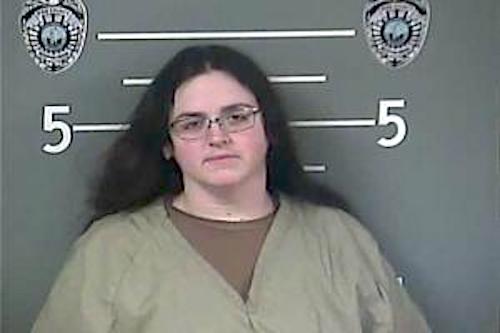 A Pike woman was sentenced Friday to serve 35 years in prison on charges of production and distribution of child pornography.

U.S. District Judge Karen Caldwell sentenced Christina Brook Mitchell, 31, of King Camp Branch, Phelps, to the prison term, as well as a lifetime of supervised release, related to a case in which prosecutors said she produced pornography using her own child for a South Carolina man.

During a sentencing hearing Friday in U.S. District Court in Pikeville, Mitchell’s attorney, Steve Owens, presented witnesses and testimony that was intended to show that Mitchell came from a good family and had no trouble prior to beginning a relationship with Jonathan Manigault, 35, of Myrtle Beach.

Manigault, Owens said Friday, “preyed” on Mitchell, who, in the aftermath of a divorce, began communication with Manigault while he was in prison.

Mitchell, Owens said, was in a vulnerable state of mind when she began receiving letters from Manigault.

“These men who do this, they know how to do it and who to do it to,” Owens said.

However, Assistant U.S. Attorney Jenna Reed argued that Mitchell was aware of her actions, even making children available to Manigault in person in South Carolina.

“There is no explanation for the harm that has been caused in this case,” Reed said.

Mitchell, she said, was not a victim, but instead had victimized her own children.

Reed read messages between Mitchell and Manigault during Friday’s hearing which showed that Mitchell knew Manigault’s intentions were to victimize children. Also, Reed said it was “telling and aggravating” that Mitchell had said since the charges were filed that she doesn’t need mental health treatment in connection with the crimes.

Caldwell pointed out in passing the sentence that, under federal guidelines, Mitchell faced a potential sentence of 60 years. The judge added that, in her 20 years on the bench, she has never seen a case in which the defendant’s offense level was so high but her criminal history and other factors were so low.

Caldwell said the testimony and evidence showing that Mitchell’s good family life and good childhood, as well as her education, which includes time in college, show a difference between Mitchell and the typical defendant in her court.

However, she said, those same factors mean that the only thing really bearing on the sentence was Mitchell’s conduct in this case.

“It is a heinous offense,” Caldwell said.

She pointed out that Mitchell could have stopped at any point and wasn’t under duress to conduct the actions she committed.

“She did it because she wanted to,” Caldwell said.

Caldwell said part of the factor her decision, however, in sentencing Mitchell to less time than the guidelines provided was that Manigault will not face the potential of 60 years when he’s sentenced in April.

Mitchell was originally arrested June 30, 2018, during the course of an investigation by Pikeville Police Officer Tommy Fouts. Pikeville Police received complaints that Mitchell had images of one of her children in “a sexual pose” on her phone. After being informed of the complaint the night of her arrest, court documents said, Mitchell showed officers the images on the phone, and a detective wrote in the citation in the case that there was “an image of a small child in a sexual pose.”

The investigation also led police to Manigault, who was living outside of Kentucky and who had allegedly received at least one sexually explicit image.

Both Mitchell and Manigault were eventually indicted by federal authorities and a superseding indictment was later handed down with charges related to a second child.