A PAINTSVILLE POLICE ARREST LOCAL MAN WANTED ON FLEEING AND EVADING, ALONG WITH MULTIPLE OTHER CHARGES

SUSPECT WENT ON TWO DAY MINI-CRIME SPREE, MOST OF IT WITHOUT A SHIRT!! 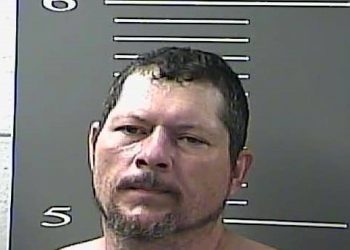 A Johnson County man wanted by Paintsville Police on Fleeing or Evading, as well as several other criminal charges, has been arrested.

According to reports, on Wednesday afternoon, February 12, at around 3 P.M., Paintsville Police received a 911 call about an alleged domestic dispute at an apartment in downtown Paintsville.

When Paintsville Police officers arrived at the scene, they reported that a man, identified as 43 year-old John E. Baldridge, had fled the apartment through a window. Paintsville Police, along with the Johnson County Sheriff’s Department, searched for John Baldridge, but could not locate his whereabouts.

John Baldridge was charged 10 criminal counts, which were:

* Theft By Unlawful Taking Or Disposition Contents From Vehicle Under $500,

…and John Baldridge was served with 4 Court Bench Warrants and a Warrant for being a Fugitive From Another State.

The charges for the Burglary Baldridge is facing was associated with a theft Wednesday evening from a local business in downtown Paintsville.

John Baldridge was lodged and remains in the Big Sandy Regional Detention Center.