OFFICERS CATCH UP TO THE SUSPECT LATER ON A THE HOME OF A RELATIVE, DOES NOT GO QUIETLY DURING RESISTING OF HIS ARREST 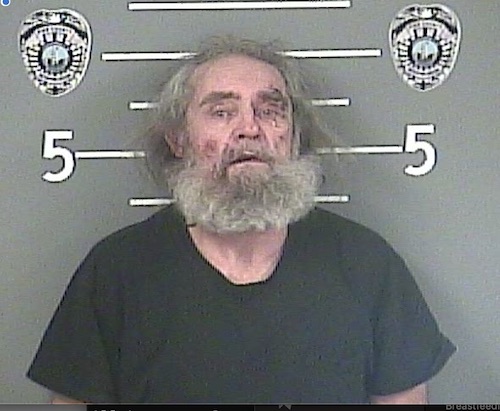 HE SUCCESSFULLY OUTRAN THE COPS, BUT HIS RUNING GOT GROUNDED WHEN POLICE CAUGHT UP WITH HIM AT A RELATIVE’S HOUSE WHERE HE WAS HIDING.

A Pike County man is facing more than a dozen criminal offenses, including several felony charges after allegedly fleeing from Pikeville Police at speeds over 90 miles per hour during a lengthy chase which officers had to stop their pursuit due to safety hazards of the dangerous chase, endangering the lives of drivers in the course of the chase..

According to the court documents, on Sunday evening, February 9, Pikeville Police Department officer Austin Kranzman, just before 10 P.M., observed John Charles driving a Dodge Caravan in the parking lot of the Double Kwik on Bypass Road in Pikeville.

Upon a database search, the court document said, Austin Kranzman found that John Charles’ license was suspended on November 3, 2019, and the vehicle Charles was driving had an illegible temporary tag, which was found to belong to a Toyota passenger car. Austin Kranzman wrote that he attempted to do a traffic stop on the vehicle, but John Charles’ vehicle began accelerating and the vehicle showed no signs of stopping.

Officer Kranzman wrote that, during the pursuit, Charles’ vehicle reached speeds exceeding 90 mph and he drove into the oncoming lane of traffic on “numerous occasions, at times driving exclusively in the oncoming lane for extended periods of time.”

Charles, the court document said, nearly impacted several vehicles in the oncoming lane several times, and officer Kranzman and other police units who had joined the chase, broke off the pursuit due to, “severe risk of injury or death” John Charles’ actions were posing due to the danger to the public.

John Charles, the court documents said, also threatened officer Austin Kranzman for arresting him with physical force, while they were at the hospital.

“John Charles stated that the next time I see him that he will ‘have a gun and this will go down differently,’ stating that he will attempt to kill me,” officer Kranzman wrote.

John Paul Charles was charged with a total of 16 charges counts, 14 of which were related to the wild chase. Those charges John Charles is facing with are:

John Charles was lodged in the Pike County Detention Center, and Charles pleaded not guilty to the charges Monday before Pike County District Court Judge Robert Wright, who ordered John Charles held on a $2,000 cash bond.